The female orgasm is a riddle wrapped in a mystery inside a vagina.

No one’s sure why people with vaginas evolved to have them in the first place — unlike male orgasms, they aren’t strictly necessary for reproduction, so that biological need is ruled out.

And why can some women orgasm easily while others can’t at all? Is some underlying health issue at play?

There’s no shortage of questions, but the main reason they remain unanswered is that female orgasms are just really hard to study.

Researchers can ask women questions about their orgasms, but their responses might not be entirely accurate — for example, a woman might say it takes her an average of three minutes to reach climax when it’s really closer to two-and-a-half.

Now, sex tech company Lioness has launched a platform where users can submit data from their smart vibrators to help scientists study the female orgasm.

At first glance, the Lioness looks like your standard sex toy, but it contains sensors that measure movement, temperature, and muscle contractions.

Like other running and exercise apps, they can also include notes on each session (if they were alone or with a partner, trying out a new lubricant, or anything else that might be relevant).

The goal is to integrate sexual function into our overall understanding of health.

The idea behind the Lioness was that women could use this feedback to better understand — or even improve — their sex lives, but Lioness also saw its potential to help researchers studying female orgasms and their connection to both pleasure and health.

Now, the company has launched the Lioness Sex Research Platform.

Academic and medical researchers in need of data on female orgasms can submit study proposals to Lioness for approval. Lioness owners can then scroll through the list of approved studies in the app and choose which (if any) they want to anonymously opt into.

The Future of Sex Research

The platform is still new, and the goal of one of the first studies — conducted by researchers at  the non-profit Center on Genital Health and Education — is to validate the Lioness as a viable research tool.

Looking ahead, it’s hard to predict what researchers might learn from the platform, but as Lioness CEO Liz Klinger points out, it wasn’t until researchers started studying erectile dysfunction that they discovered a link between ED and cardiovascular problems.

There could be a similar link between health and female orgasms, but no one knows because it hasn’t been studied yet.

“Our goal with the Lioness Research Platform is to integrate sexual function as a missing puzzle piece to our overall understanding of health and wellbeing in both research and day-to-day life,” Klinger said. “I think we could have a key to understanding the health of women and people with vaginas.” 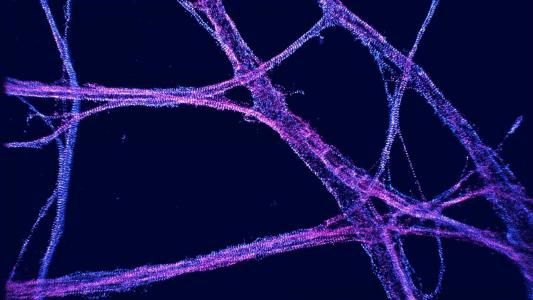 A new data visualization tool called vLUME recreates tiny objects like cells and neurons in a virtual world, allowing scientists to then explore them in VR.