A new study has demonstrated a gene-editing technology that outdoes CRISPR, able to simultaneously perform millions of genetic edits. The system, which uses segments of bacterial DNA called retrons, could be the future of gene editing.

The challenge: CRISPR Cas9 has become synonymous with gene editing. But gene-editing tech is older than CRISPR, and researchers haven’t stopped there. They continue to look for gene-editing technology that can overcome the difficulties of CRISPR.

CRISPR is a cut-and-paste genome editor. It works by acting as a molecular scissor — using an enzyme (typically Cas9) to cut segments of unwanted DNA then paste in desired ones.

Despite being hailed for its gene-editing power, there are still challenges to overcome. For example, the gene-editing technology has been known to edit in the wrong place, and sometimes fails to make the desired edit, too. There are possible side effects of cutting DNA, and it is difficult to make several edits at once.

The system, called Retron Library Recombineering (RLR), edits the genome without making any cuts to the DNA strand. It can also be quickly applied to large groups of cells. It does this by introducing a new sequence of DNA when the cell is in the process of dividing and copying its genome, just before cell division.

This promising new gene-editing technology relies on retrons — segments of bacterial DNA that produce single-stranded DNA as self-defense against viruses. It ensures the intended DNA sequence ends up in the daughter cell after cell division. As cells continue to replicate naturally through cell division, the proportion of correctly edited cells increases.

“We figured that retrons should give us the ability to produce ssDNA (single-stranded DNA) within the cells we want to edit rather than trying to force them into the cell from the outside, and without damaging the native DNA, which were both very compelling qualities,” Daniel Goodman, co-author of the study, told New Atlas.

The team tested the new tool on E.coli by introducing antibiotic-resistant genes into the bacteria. The results were more than promising. After just 20 generations, 90% of the population had incorporated the introduced gene sequence — a much higher rate than CRISPR.

“RLR is a simpler, more flexible gene-editing tool that can be used for highly multiplexed experiments, which eliminates the toxicity often observed with CRISPR and improves researchers’ ability to explore mutations at the genome level,” said Harvard geneticist and co-author George Church in a statement.

The future of RLR: This new gene-editing technology opens up immediate opportunities for studying bacterial genomes. In the future, it could be used as a treatment for antibiotic resistance or as a gene-editing alternative to CRISPR in animals and even humans (although that still needs to be proven — bacteria are very different from animal cells).

“This work helps establish a road map toward using RLR in other genetic systems, which opens up many exciting possibilities for future genetic research,” Church said.

CRISPR
“Soft CRISPR” is safer and could help cure more diseases
A new CRISPR system was far more effective and precise than CRISPR-Cas9 when tested in fruit flies. 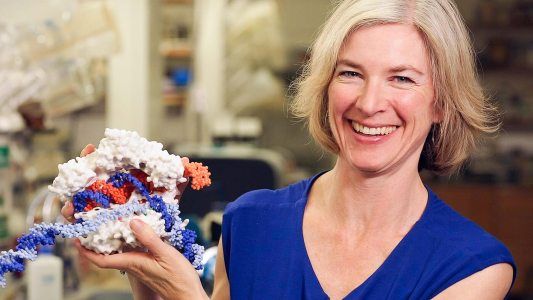 Jennifer Doudna on the future of CRISPR.