When pain interrupts daily life, people turn to medications for relief. But drugs come with their own drawbacks. Now, a few scientists are finding that exposure to the color green – green light therapy – may be a drug-free solution to some chronic pain.

Terri Robert got her first migraine when she was just six years old, and they come on as frequently as 20 days in a month. She has missed her children’s school functions, skipped out on family events, and even had to quit her job as a dental office manager – all because of migraines.

Robert isn’t alone in this. Migraines are considered one of the most disabling illnesses in the world, affecting 39 million Americans, most of whom are unable to function normally during a migraine. Robert says they are much worse than the common headache – bringing on excruciating pain and other symptoms like dizziness, blurred vision, or vomiting.

Robert has tried numerous medications, but she says sometimes the side effects – which can include a higher risk of stroke, fatigue, or nausea – aren’t worth it. Now, when she feels a migraine coming on, she sits by a green lamp.

“When I’m feeling (a migraine), I’m more comfortable in a room where the green lamp is the only light. I found several times it has aborted a migraine – just stopped it in its tracks,” she says. There are some scientists who think they know why.

The lamp was recommended by Harvard Medical School headache specialist Rami Burstein who found that light exacerbates migraines. Photophobia (extreme sensitivity to light) is associated with more than 80% of migraine attacks – but the green light in his research is different. He found that a narrow wavelength of green light is less aggravating than other colors because it sends a smaller, less disruptive signal to the brain via the visual cortex.

“It became apparent that we should be able to use a narrow band of green light to treat photophobia,” Burstein says. He created the “Allay lamp,” which uses a narrow-band green light, and began recommending it to patients. He says it is “risk-free and affordable.”

Now patients could put their kids to bed, read a book, or enjoy a hearty meal with friends – instead of being isolated in darkness. Not only did green light fail to trigger pain, his research even found that it has a soothing effect.

Can Green Light Relieve Other Pain?

Padma Gulur, who does not work with Burstein, is looking into the possibility that green light might relieve other forms of pain besides migraines. Already one year into a clinical trial – testing the effects of green, blue, or white light on people’s post surgery or fibromyalgia pain experience – Gulur says the data looks promising that green light therapy could provide benefit to those in pain.

Gulur, a Duke University anesthesiologist, says that finding a way to reduce pain without drugs is essential, given the addictive nature and side effects of opioids and other pain relievers.

“We have very few options that are safe, easy to comply with, and have an impact on the pain experience. So it was a quest for non-pharmacological options that could help patients in pain that led to looking at the potential for light-based therapy,” she says.

Another researcher has tried to understand the connection between green light and pain by putting tiny contact lenses on rats. (Yes, really!)

Mohab Ibrahim, an anesthesiologist at the University of Arizona, found that when rats were exposed to green light, they felt less pain – or, at least, they were able to tolerate more discomfort in the form of heat or pressure.

Wondering which mattered more – the light washing over the skin or contacting the eyes –  Irbahim created tiny, rat-sized contact lenses. He found that when rats were wearing the contact lenses, which let only green light through, they similarly showed less discomfort.

Ibrahim has now moved on to a study with human participants. He says his results (publishing soon) show green light exposure significantly reduced the intensity and frequency of migraines and the discomfort of fibromyalgia.

Green Light Could Be an Affordable, Drug-Free Pain Reliever

Although still a new field of research, Ibrahim thinks more doctors will start recommending green light therapy to their patients. “This is a brand-new field. Only now are we starting to realize that light has biological functions,” he says.

“According to the research, it seems as if green light is less aggravating, and there is a potential that it might be of potential benefit,” says Teshamae Sereen Monteith, a doctor and neurobiologist who researches migraine disorders at University of Miami. However, “We need larger studies and real world experience to really say.”

Monteith, who also sees migraine patients, hasn’t talked with any of them about green light therapy, but one of her  patients has reported that, while working in a casino, they got migraine attacks when glaring into red lights but not green.

Monteith has read studies that show green light reduces headache intensity and even increases positive emotions. But she says green light therapy would need a large, placebo-controlled trial before it could be prescribed by doctors. Designing a placebo study – one where participants are unaware of the color they are exposed to – would be challenging, given that light therapy is received visually and most people would recognize the color they are looking at.

But Ibrahim is optimistic. He says that although it might not work for everyone, the benefits outweigh the risks.

“Any treatment that a physician recommends – aspirin, Advil, whatever it is – you always ask yourself two questions: What is the benefit, and what is the risk? So far, no one has reported any negative side effects,” Ibrahim says. “What we have here is something very promising. And – this is something you cannot always say in the medical field – it is affordable almost by anyone.”

Still, Ibrahim cautions, you should think carefully and consult your doctor before trying any new therapy. You can get a green light bulb for under ten dollars at the local hardware store, whereas the Allay lamp could run you $200. But both Burstein and Ibrahim say that having the correct wavelength is important.

A typical green light bulb emits light in a wide wavelength range, between 490-565 nanometers. Burstein thinks that the edges of that range might activate too many of the photoreceptors in the eye that are sensitive to blue or red, rendering it less effective than a narrow-band light. That’s why Burstein designed his lamp to a narrower band of green light (510 to 530 nanometers), while Ibrahim used a photometer to ensure the bulbs in his study were about 525 nanometers.

Teri Robert has been using her green lamp for about a month. After having tried Botox, steroids, beta-blockers, and even a magnetic stimulation device, Robert sees promise with green light therapy. She is going to stick with it.

“When I feel a migraine coming on, I sit and read by the lamp, and it goes away,” she says. “I’m also trying to sit with it two hours per day to see if it will prevent migraines – why not? It can’t hurt.” 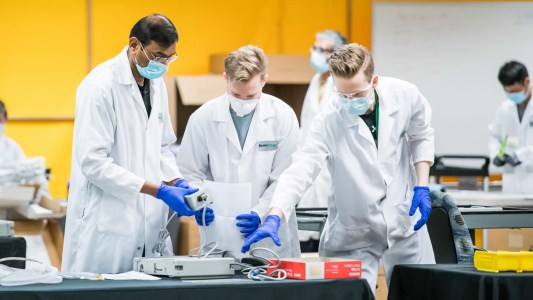 Silicon Valley-based Bloom Energy has refurbished hundreds of ventilators for coronavirus patients in just a few weeks — and it shows no signs of slowing down.