After years of failed attempts, University of Minnesota researchers have finally managed to 3D print a human heart pump capable of beating on its own.

The pump is just 1.5 centimeters long, but the researchers believe the tiny organoid could have a huge impact on efforts to treat heart disease, the leading cause of death in the U.S.

To create their heart pump, the UMN researchers started with human pluripotent stem cells, which are capable of developing into any kind of cell in the human body.

I couldn’t believe it when we saw the whole thing contracting spontaneously.

They added those cells to a bioink, then used a special 3D printer to shape their tiny organoid. That process took less than five minutes, according to their paper, published in the journal Circulation Research. (Though the research, of course, had taken years.)

Next, they waited two weeks for the stem cells to multiply. Once the cells reached the perfect density, the researchers prompted them to evolve into heart muscle cells.

Less than a month later, the researchers’ heart pump was functioning.

“I couldn’t believe it when we looked at the dish in the lab and saw the whole thing contracting spontaneously and synchronously and able to move fluid,” lead researcher Brenda Ogle, head of UMN’s Department of Biomedical Engineering, said in a news release.

The key to their breakthrough, according to Ogle, was waiting until after printing to turn the cells into heart muscles — in previous attempts, they had developed the stem cells into heart cells before printing, and they never multiplied to the right density.

“After years of research, we were ready to give up and then two of my biomedical engineering Ph.D. students, Molly Kupfer and Wei-Han Lin, suggested we try printing the stem cells first,” she said. “We decided to give it one last try.”

The heart pump is nowhere near as complex as a fully developed human heart — it’s essentially two tubes leading into and out of a dual-chambered sac — but that’s enough to make it useful for research.

“We now have a model to track and trace what is happening at the cell and molecular level in (a) pump structure that begins to approximate the human heart,” Ogle said. “We can introduce disease and damage into the model and then study the effects of medicines and other therapeutics.”

The researchers won’t be limited to experimenting on their heart pump in the lab, either — they specifically designed it to fit into the abdominal cavities of mice for in vitro studies.

“All of this seems like a simple concept, but how you achieve this is quite complex,” Ogle said. “We see the potential and think that our new discovery could have a transformative effect on heart research.” 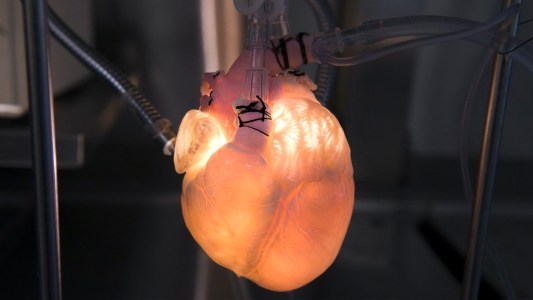 Tissue engineering and regenerative medicine experts are working to mass-produce human organs through the ARMI consortium.

Biology
Building a factory for human organs
Subscribe to Freethink for more great stories
Subscription Center
Challenges
Video
Freethink
Subscribe
We focus on solutions: the smartest people, the biggest ideas, and the most ground breaking technology shaping our future.
Subscribe