With the swirl of excitement around drugmaker Eli Lilly’s monoclonal antibody treatment — reported to reduce the severity of COVID-19 — scientists in Costa Rica are looking to create a cheaper, easier-to-manufacture version: using horse antibodies for COVID-19.

Horse blood has a surprisingly long history in human medicine. For over a century, horses, sheep, and other large animals have been inoculated with snake venom, with the resulting robust antibodies purified from their blood and administered as antivenom.

Much like antibodies against viruses, these equine antibodies bind to venom from snakes, scorpions, spiders, and fish, arresting damage and potentially saving a victim’s life.

Using the same method, researchers in Costa Rica are preparing a clinical trial of horse antibodies against COVID-19; if the antibodies prove effective, they could become a relatively cheap weapon to help hold off SARS-CoV-2, especially in low and middle income countries.

Horse antibodies for COVID-19 are created the same way as humans’, from exposure to the virus. Antivenom specialists at the University of Costa Rica’s Clodomiro Picado Institute inoculated six donated horses with proteins from the coronavirus.

Three of the horses received only a protein related to SARS-Cov-2’s dreaded spike protein, Scientific American reports; the other three got that protein, along with three others. After letting the equine immune system do its thing for a few weeks, the researchers drew their blood and separated out the horse antibodies for COVID-19.

Those antibodies were sent to the National Center for Biodefense and Infectious Disease at George Mason University. “We wanted to determine if the SARS-CoV-2 virus could be neutralized by the horse-produced antibodies,” Center executive director Charles Bailey told Scientific American.

“We exposed the antibodies produced in horses, at various dilutions, to the SARS-CoV-2 virus growing on cell culture. The virus was neutralized.”

While obviously good news, stopping the virus in a petri dish is, alas, not the same as stopping it in the wild, in humans. Which is why the next step is a clinical trial, where the horse antibodies are going to be tested on 26 patients, beginning in mid-September, Reuters reports. If the results look promising, the project hopes to expand to a larger trial in the nations’s hospitals.

A Horse Is the Source, Of Course Of Course

Eli Lilly’s much ballyhooed treatment uses what are called monoclonal antibodies; these are manufactured proteins that act like naturally produced antibodies. They’re sometimes used to treat cancers and other ailments, but are difficult and expensive to produce. They require a complex process using bacteria that can take two to four weeks, according to the New York Times, and special facilities are needed to create them.

By comparison, horse antibodies for COVID-19 would be easier and cheaper to produce. Monoclonal antibodies are designed to hone in on one specific target, while the horse’s antibodies attack many — less precision means easier manufacturing, which means a more affordable treatment. (But that may also mean less efficacy.)

“Here, the horses are the factories — at least for the production part,” public health expert Román Macaya told Scientific American. “Then comes the purification part, which is an industrial process, but the Clodomiro Picado Institute already has that infrastructure.”

Clodomiro Picado Institute COVID-19 lead researcher Alberto Alape Girón estimated a vial of horse antibodies for COVID-19 would cost about $100, Scientific American reports; in comparison, a vial of monoclonal antibodies could be ten times as expensive.

Horses make a ton of antibodies compared to people, as well.

“Just one 10-mL vial has about 80 times the quantity of antibodies you can find in 800 mL of convalescent plasma, which is the plasma donated by someone who has overcome an infection of SARS-CoV-2,” Alape-Girón told Scientific American.

Essentially, the well-known processes developed to create antivenoms (and the animals’ ubiquity) make horse antibodies for COVID-19 an attractive option.

All of this hinges on the human trials, of course; we’re dealing with a superb predator in SARS-CoV-2, and even if they do prove effective, equine antibodies will be a treatment, not a cure. But being able to fight COVID-19 within their own borders would be a source of pride in Costa Rica.

“We are proud to know that this product will save lives until the vaccine reaches the population,” Clodomiro Picado Institute project coordinator Alberto Alape told Reuters.

“We do it with our resources, without having to stand in line or compete against other countries, as can be seen with possible vaccines.”

Coronavirus
Yale’s new nasal vaccine can boost an mRNA shot
A nasal vaccine delivered as a booster to mRNA shots might offer better protection against COVID-19 and help stop the virus from spreading.
By Kristin Houser
Up Next 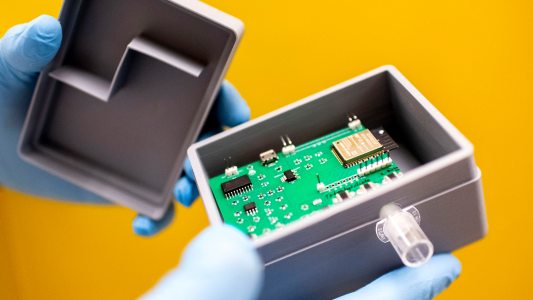 Fast, accurate, cheap, and easy to use, a coronavirus breathalyzer could be a game changer — and multiple research teams are racing to get them approved.

Coronavirus
Scientists are developing a coronavirus breathalyzer test
By B. David Zarley
Subscribe to Freethink for more great stories
Subscription Center
Sections
Video
Freethink
Subscribe
We focus on solutions: the smartest people, the biggest ideas, and the most ground breaking technology shaping our future.
Subscribe