One of humanity’s strangest and most macabre activities is slowly coming to an end, a trend that every horseshoe crab should celebrate. For the time being, however, hundreds of thousands of horseshoe crabs are being harvested from the ocean off the US’s east coast and drained of their valuable blue blood.

It’s a surreal practice, but there’s good reason for it. Limulus Polyphemus—the Atlantic horseshoe crab—has extremely valuable blood. Unlike the blood of vertebrates, horseshoe crabs do not use hemoglobin to transport oxygen throughout their body. Instead, they use hemocyanin, a chemical that gives their blood that distinctive blue color – but this isn’t what makes their blood so valuable. Instead, it’s the kind of immune cells they carry.

Vertebrates carry white blood cells in their blood streams; invertebrates like the horseshoe crab carry amebocytes instead. When an amebocyte comes into contact with a pathogen, it releases a chemical that causes the local blood to clot, which researchers believe is a mechanism for isolating dangerous pathogens. Specifically, the amebocytes in horseshoe crab blood solidifies when it comes into contact with endotoxins, a pervasive and sometimes deadly product of bacteria that kicks immune systems into gear, sometimes resulting in fever, organ failure, or septic shock.

The presence of endotoxins in drugs, needles, or anything that comes into contact with human blood is a serious problem. Researchers used to give rabbits a sample of whatever material or substance they were interested in and observe them for hours to see if their immune system reacted, implying the presence of endotoxins. But the amebocytes in horseshoe blood were a game changer—instead of conducting time-consuming tests on rabbits, horseshoe crab amebocytes could be added to a sample of a substance. If the sample started to clot, then endotoxins were there.

The substance derived from horseshoe blood is called Limulus Amebocyte Lysate, or LAL, and it quickly became nearly as valuable as gold. Thanks to the ubiquity of endotoxins and the dire need to test for their presence, a quart of horseshoe crab blood could fetch $15,000. To cash in, companies harvest as many as 600,000 crabs a year. Up to 30% of their blood is drained before they are returned to the ocean, although a procedure this traumatic obviously entails some mortality. Estimates vary wildly. Some official sources put the mortality estimate at around 3 or 4%, but these figures typically represent mortality directly resulting from transportation and handling. Other organizations put the mortality rate as high as 30%.

Fortunately for horseshoe crabs, this practice may be dying out. Researchers discovered that a molecule in LAL called factor C was responsible for its clotting action. Researchers genetically modified the guts of insects—who belong to the same phylum as horseshoe crabs, Arthropoda—to produce factor C. As a result, the insects began pumping out factor C, which could then be sold as recombinant factor C (rFC) on the market as a viable substitute to horseshoe crab blood.

Though rFC has been on the market since 2003, it’s been slow to gain traction. Initially, it was only being produced by one manufacturer, the Lonza Group. Pharmaceutical companies are wary to rely on a single manufacturer in case an emergency occurs, and their supply is cut off. The Food and Drug Administration’s (FDA’s) regulatory process was quite slow as well. But these obstacles are gradually being overcome. Hyglos GmbH, another pharmaceutical manufacturer, began producing rFC in 2013. European regulatory bodies have approved its use, which lays the groundwork for future approval by the FDA. Major pharmaceutical companies who have used rFC have confirmed that it works just as well as LAL. Today, experts believe that rFC will become the dominant method of detecting endotoxins, letting horseshoe crabs off the hook. 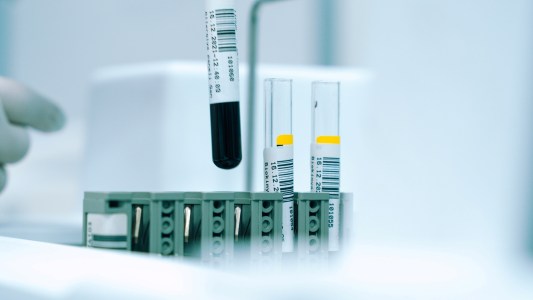 Golden blood, despite sounding like medical nonsense, is actually the nickname for Rh-null, the world’s rarest blood type.

Biology
Golden blood: The rarest blood type in the world
By Kevin Dickinson
Subscribe to Freethink for more great stories
Subscription Center
Sections
Video
Freethink
Subscribe
We focus on solutions: the smartest people, the biggest ideas, and the most ground breaking technology shaping our future.
Subscribe