In the early months of the pandemic, doctors didn’t know what might help COVID-19 patients — so they tried everything.

After testing different drugs in different combinations on patients with different disease severities, they were able to home in on treatments that helped — but not before hundreds of thousands of people had already died.

Now, Georgia researchers have developed an inhaled CRISPR treatment that could provide us with safe, effective treatment for a future viral outbreak within weeks — and it incorporates the same tech behind the first COVID-19 vaccines.

Every cell in your body has DNA in the nucleus at its center. Messenger RNA (mRNA) is a type of molecule that carries instructions from DNA to the part of the cell where proteins are created.

Both Pfizer and Modern developed vaccines that used mRNA to get the body to produce a part of the coronavirus so the immune system would create antibodies against it.

The mRNA in this new treatment carries instructions for producing a CRISPR protein called Cas13a.

This protein is a natural antiviral that can destroy the genetic code RNA viruses use to replicate — and since 98% of the viruses known to infect humans are RNA viruses, Cas13a has been the target of research to treat infections.

To get Cas13a to attack a specific virus, the researchers just needed to know the virus’ genetic sequence. They could then design a “guide strand” that sent the Cas13a protein right to a vulnerable spot along the virus’s sequence.

To target a different virus, they just had to change the guide strand.

Once the guide strand is coded, the whole therapy can be inhaled using a nebulizer.

This not only gets the drug straight to the lungs — a boon when treating respiratory infections — it also means the therapy could possibly even be self-administered, which could help prevent the spread of a disease.

“If you’re really trying to think of something that’s going to be a treatment that someone can actually give themselves in their own house, the nebulizer we used is not terribly different from one that you can go buy at a pharmacy,” Santangelo said.

Using mRNA programmed with instructions to produce Cas13a is much less risky than a straightforward CRISPR therapy, too.

“The mRNA is transient,” Santangelo said. “It doesn’t get into the nucleus, doesn’t affect your DNA, and for these CRISPR proteins, you really don’t want them expressed for long periods of time.”

When the inhaled CRISPR treatment was tested on mice with the flu and hamsters with SARS-CoV-2, the animals recovered from the infections and experienced no side effects. This marked the first testing of Cas13a to treat infections in live animals — previous research took place in cell cultures.

If the treatment proves safe and effective in people, it could play a pivotal role in future pandemic response efforts.

“One of the first things that society and the CDC are going to get when a pandemic emerges is the genetic sequence,” study co-author Daryll Vanover said. “It’s one of the first tools that the CDC and the surveillance teams are going to use to identify what kind of virus this is and to begin tracking it.”

Armed with that sequence, the researchers could tweak their inhaled CRISPR treatment to target the new virus and have it ready for testing within weeks.

“If we had a therapy a month after (the pandemic) hit, what would things look like now?” Santangelo said. “It could make a huge difference, the impact on the economy, the impact on people.”

Medicine
Pfizer’s RSV vaccine for pregnant women protects newborns
Pfizer plans to begin the regulatory approval process by the end of the year.
Up Next 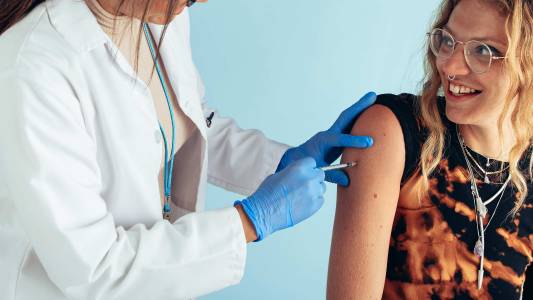 Australian researchers have found an immune response measurement they believe can predict protection against COVID-19.

Coronavirus
Predicting your protection against COVID-19
Subscribe to Freethink for more great stories
Subscription Center
Sections
Video
Freethink
Subscribe
We focus on solutions: the smartest people, the biggest ideas, and the most ground breaking technology shaping our future.
Subscribe