In 1918, the Spanish flu swept the planet. In two years, half a billion people had been infected — more than a quarter of the world’s population at the time. Between 50 and 100 million people died, and (unusually for the flu), it disproportionately killed younger and healthier patients, not just the very old, young, or sick.

It was a truly worldwide pandemic. Thanks to rising global trade (and a world war), the contagion streaked across oceans and climates, from the arctic tundra to remote Pacific islands. It was especially devastating in the cramped quarters of World War I ships, barracks, and trenches. Then, as mysteriously as it appeared, it vanished. No flu outbreak has ever been as contagious or deadly since.

A Very Human History of Pandemics

Spanish flu is notable for being the worst pandemic in the modern era — killing more people in two years than HIV/AIDS has in four decades. But in earlier periods, such devastating outbreaks happened frequently, albeit on a local or regional scale. In the 1300s, the Black Death (carried from China by Mongolian armies and rat-infested trade ships) killed between 30-60% of Europe’s population — about 20% of the human race at the time.

When Old World diseases were suddenly introduced to the Americas in 1492, the native population was all but wiped out. Waves of flu, smallpox, measles, typhus, salmonella, and malaria shot into the continents from every point of European contact. Entire cities, tribes, and empires were laid low. In less than a century, Eurasian diseases might have killed over 90% of the Americas’ population.

In the late 19th century, colonization kicked off epidemics of smallpox, sleeping sickness, dysentery, and swine flu in the African interior. Although records are sketchy, from 1880 to 1920, disease (aggravated by decades of brutality under King Leopold II of Belgium) might have cut the population of the Congo in half.

And these are only major plagues that we know about — countless villages and towns throughout history have been wiped out by random travelers carrying an unknown disease.

We’re All Together Now

Given humanity’s long history of devastating diseases, it’s natural to worry about the next one. Apocalyptic prophecies about world-ending plagues go back to the Book of Revelation, but they are a perennially popular genre of books, film, television, news, and smartphone games.

In one sense, globalization has made the world look more vulnerable than ever. The rise of cheap, widespread air travel raises the possibility that an infection could spread across the world much faster than a vaccine or other countermeasures could be prepared.

And international shipping is an invisible but nonetheless massive part of a globalized economy. Tens of thousands of giant cargo ships are plying the oceans at any given moment, and even though they require less manpower these days, these freight routes are more threads tying countries and continents together.

Will “Disease X” Get Us?

These concerns are periodically addressed by public health authorities, and they are not always reassuring.

Earlier this year, the World Health Organization (WHO) issued a report on diseases that require urgent medical research, based on their potential to cause severe or deadly outbreaks. The list included familiar diseases, like Zika, SARS, and Ebola, but also “Disease X“: a hypothetical “pathogen currently unknown to cause human disease” that could trigger “a serious international epidemic.”

Needless to say, a vague warning about an unknown superbug resulted in a wave of alarming media coverage. Some stories mashed up the WHO warning on “Disease X” with a Johns Hopkins University report on pathogens that posed a “global catastrophic biological risk” or GCBR. It aimed to identify the characteristics of diseases that:

In other words, end-of-the-world type stuff. The report concluded that airborne, respiratory, RNA-based viruses are the most likely type of disease to trigger a global catastrophe. Pathogens like these mutate frequently, making stable vaccines harder to create (unlike DNA viruses, such as smallpox), and could spread rapidly (unlike diseases carried by bodily fluids, such as Ebola).

Some potential suspects were coronaviruses, which include things like SARS and others responsible for the common cold, as well as influenzas, including human, bird, and swine flus.

What If Our Weakness Is Actually a Strength?

There is a lingering question here: what is the next “GCBR” or “Disease X” waiting for? Why haven’t we seen another Spanish flu in over a century? We’ve seen candidates come and go — SARS and Asian bird flu flared up, but they just as quickly receded.

Many people think that we’ve just been lucky, and the next great plague is just around the corner. But there is another way of looking our hyperconnected world that suggests we really are getting more resilient to deadly pandemics. Foreign trade and travel used to be among the greatest risks for spreading disease, but ironically, they may now be our best defense.

By erasing the boundaries between different populations, globalization could be increasing our immunity to the kinds of infections that sporadically devastated humanity in the past. And, unlike in earlier eras, this immunity won’t come from brutal natural selection — as when the Black Death killed off half of Europeans with less natural resistance — but from more sniffles and coughs.

Researchers at the University of Oxford have published a model that shows how milder outbreaks spreading between groups can make the whole population more resilient to deadlier outbreaks:

The high frequency of modern travel has led to concerns about a devastating pandemic since a lethal pathogen strain could spread worldwide quickly. Many historical pandemics have arisen following pathogen evolution to a more virulent form. However, some pathogen strains invoke immune responses that provide partial cross-immunity against infection with related strains.

The antibodies your body produces for one disease tend to provide a bit of natural protection against its relatives. This cross-immunity is the key to blocking the spread of deadlier versions of a disease (much like Edward Jenner’s discovery that cowpox provided partial immunity to smallpox).

The authors speculate that increasing cross-immunity could help explain the “absence of a global pandemic as severe as the 1918 influenza pandemic in the century since.”

In other words, it’s getting harder for diseases to develop, mutate in isolation, and suddenly decimate an unsuspecting world. Viruses are evolving all the time, of course, but they haven’t risen to anything like the virulence of Spanish flu.

Our constant exposure to less virulent forms of the flu, either naturally or through vaccines, may help us more or less keep up with the evolving strains out in the wild. (And the really good news is that less severe forms of a disease are more likely to be the ones that spread, because they don’t knock out their host.)

Finding Them Before They Find Us

In some ways, it’s obvious that connectivity has made us safer. In Eurasia, farmers and pathogens were locked in an arms race against each other for thousands of years: smallpox becomes more virulent, and humans develop more resistance, back and forth over the generations.

But in the Americas, people had been totally isolated from those diseases for 10,000 years (or more) before Columbus’s voyage, meaning that they didn’t have any of the defenses that had evolved to deal with it. As a result, thousands of years of human/virus warfare in Eurasia had developed what amounted an arsenal of bioweapons that devastated the Americas. Similar dynamics have played out everywhere people and animals have long been isolated from each other.

Nothing like it can ever happen again, since all the world’s continents and populations are connected now. The immunity gained from that process came at a terrible cost, and even today, the “regular flu” is a miserable and dangerous disease.

Fortunately, these days, we have a range of vaccines that can confer immunity without the pain of getting sick or the risk of spreading the infection to others. That has allowed us to eradicate smallpox outright, and cutting-edge techniques are letting scientists develop vaccines for new strains of disease in a matter of weeks, rather than years.

And there’s more that could be done to control the risk of new infections. The Global Virome Project plans to track down and identify most of the estimated 700,000 unknown bird and mammal viruses that have the potential to infect humans — essentially, finding them before they find us. This will create a global database that could be used to rapidly identify new and emerging diseases and help create vaccines for them, and potentially even predict the next outbreak.

The bottom line is that we aren’t doomed, but the battle against disease is one that can never be totally won. Evolution means that there’s always going to be a new virus or new strain, so we’ll always need new tools to fight it. 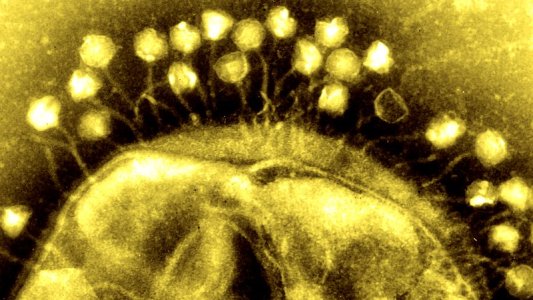 Scientists aren’t exactly sure yet what the “virome” is up to, but it’s probably important.

Virology
Meet the 380 trillion viruses inside your body
By Chandrabali Ghose and David Pride
Subscribe to Freethink for more great stories
Subscription Center
Sections
Video
Freethink
Subscribe
We focus on solutions: the smartest people, the biggest ideas, and the most ground breaking technology shaping our future.
Subscribe