A new medical device gives optometrists a fast, easy way to monitor macular degeneration risk — and it was made possible by studying octopus vision.

The disease: Macular degeneration is an incurable, progressive eye disease caused by damage to the macula, the part of the eye that allows us to see things directly in front of us.

At first, a person with macular degeneration might have blurry central vision. Over time, though, the disease can progress to the point where they have no central vision at all, making it hard to live an independent life.

Age, weight, and genetics all play a role in a person’s likelihood of developing macular degeneration, as does the level of certain pigments in the macula.

These pigments act as a protective barrier between the macula and damage-causing violet-blue light, and we get them from the food we eat.

The challenge: A key macular degeneration risk factor is a low level of macular pigments. If people know they have low levels of the pigments, they can eat more foods that contain them, which could decrease their risk of developing the disease.

However, current testing methods for those pigment levels can be time-consuming, difficult, or expensive, so they aren’t a part of most standard eye exams.

The polarizing study: Researchers at the University of Bristol were studying how well octopuses could detect polarized light when they realized they may have found a new way to measure macular pigment levels in people.

Polarized light moves along a single plane — it might only oscillate straight up and down, for example — as opposed to unpolarized light, which can move in any direction at random.

It’s like a super sense most of us don’t even know we have.

We’re surrounded by both types of light, but for the most part, the difference between the two escapes us. However, if we try, we can detect polarized light — thanks to our macular pigments.

“Humans can perceive polarized (light) because macular pigments in our eyes differentially absorb violet-blue light depending on its angle of polarization, an effect known as Haidinger’s brushes,” researcher Shelby Temple said in a press release.

“It’s like a super sense most of us don’t even know we have, revealing a faint yellow bow-tie shape on the retina.”

From octopuses to people: Temple and his colleagues have translated a technology developed to measure octopuses’ ability to detect polarized light into a device called the MP-eye.

This device can quickly measure a person’s ability to detect polarized light. A lower perception of the light indicates lower levels of macular pigments — and a higher risk of macular degeneration. 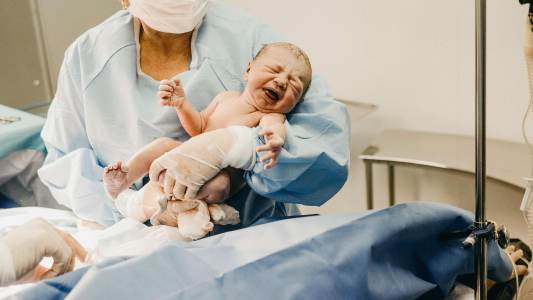 Stanford University researchers have identified blood-based biomarkers that can be used to predict the onset of labor in pregnant women.

Biology
New blood test could predict the onset of labor
By Kristin Houser
Subscribe to Freethink for more great stories
Subscription Center
Sections
Video
Freethink
Subscribe
We focus on solutions: the smartest people, the biggest ideas, and the most ground breaking technology shaping our future.
Subscribe