Americans are plagued by pain: more than 20% report they suffer from chronic pain, and many turn to medical marijuana for relief.

But the inability of doctors to prescribe precise doses of the drug, combined with its psychoactive side effects, are two major limiting factors in its usage.

Now, a new study may have identified a single solution to both problems: microdosing marijuana.

If you’ve heard of microdosing before, it was probably in the context of psychedelic drugs, such as LSD or psilocybin.

Proponents of the practice claim that regularly taking small doses of the drugs confers many benefits (increased focus, reduced anxiety, etc.) without producing any of the potentially debilitating hallucinogenic effects. And scientific research is emerging to back up their claims.

It wasn’t until July 1, however, that researchers published data from the first clinical trial focused on microdosing marijuana — and the results are encouraging for people with chronic pain.

Researchers from the Israeli medical-technology company Syqe Medical enrolled 27 people with chronic pain in their trial, the results of which are now published in the peer-reviewed European Journal of Pain.

On three separate days, each participant was randomly given either a placebo or a microdose — .5 milligrams or 1 milligram — of the psychoactive cannabis compound THC. (For comparison, the average medical marijuana user consumes 150 milligrams of THC daily, according to Syqe.)

All the doses were delivered via an inhaler designed and sold by Syqe Medical.

The pain reduction remained stable for at least 2.5 hours.

The researchers measured participants’ vital signs before administering the doses and several times over the next two and a half hours. They also took blood samples before and a dozen times after inhalation to measure participants’ THC levels.

From all of this data, the researchers found that microdosing marijuana at either dosing level significantly reduced pain and that the pain reduction remained stable for at  least two and a half hours.

The 1-mg dose produced the greatest amount of chronic pain relief, while the placebo resulted in a small, but not statistically significant, reduction in reported pain.

“We can conclude from the study results that low doses of cannabis may provide desirable effects while avoiding cognitive debilitations, significantly contributing to daily functioning, quality of life, and safety of the patient,” lead researcher Elon Eisenberg said in a press release.

This trial does have its shortcomings.

For one, it’s sample size was small, and though the study was peer-reviewed, it was funded and carried out by a company that stands to benefit financially from positive research on microdosing.

Then there’s the lack of any insights into the longer-term effects of microdosing marijuana — Would a person need to inhale a dose every few hours every day for the pain relief benefits to last? Would that repeated use produce side effects or affect cognition in a way the trial’s limited use didn’t?

Still, right now, treating any condition with marijuana is a largely imprecise practice — the amount of THC in cannabis can vary widely from strain to strain, and patients are largely left to fend for themselves when deciding how much to consume or how to handle side effects.

(It’s worth noting that all such problems have to be compared to tradeoffs from alternative treatments, such as opioids, which have their own risks.)

The Syqe researchers’ findings will need to be confirmed by future independent studies, but if small doses of THC are as effective as larger ones, the 50 million Americans suffering from chronic pain could have another way to feel better that doesn’t require feeling high. 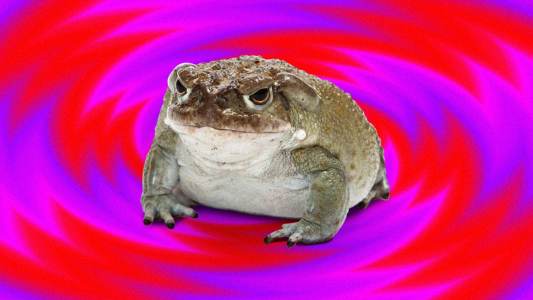 5-MeO-DMT, a psychedelic found in toad venom, causes mushroom-intense trips that are over quick. Could it have more accessible therapeutic potential?