It took Moderna just two days to create the mRNA vaccine currently being used to protect people from COVID-19.

Now, the biotech company has announced plans to use the same technology to develop an mRNA vaccine for HIV.

It’s almost certainly going to take more than two days — but if Moderna is successful, its vaccine would be the first to protect against HIV, which infected 1.7 million people in 2019 and led to the death of nearly 700,000 more.

When a virus or bacteria infects us for the first time, our immune system creates proteins called antibodies.

If the pathogen infects us again, those antibodies neutralize the invader and spur the immune system into action right away, and that quick response can prevent a full-blown infection from developing.

Vaccines are designed to prompt the creation of antibodies for a specific pathogen before that first infection ever happens. Then we’re protected against the bug if it ever does show up in the future.

Vaccines don’t all trigger this antibody production in the same way, though. Some use a killed or weakened pathogen, while others use only pieces of it.

An mRNA vaccine delivers a bit of genetic code that prompts the body to create a part of a pathogen that triggers antibody production. That code is easier than ever to obtain thanks to advanced sequencing technology.

And once you have one effective mRNA vaccine, you also have the groundwork laid for others — just plug in the genetic code for a mutated variant or a new pathogen and you have a new vaccine.

In addition to being straightforward to develop, mRNA vaccines are also easy to scale and cheap to produce — but they do have their drawbacks.

The FDA had never approved an mRNA vaccine prior to COVID-19.

The main one is a need to be stored and transported at cold temperatures — Moderna’s coronavirus vaccine, for example, needs to be stored at -4 degrees Fahrenheit until it’s ready to be used. That could make mRNA vaccines difficult to distribute in remote or less-developed regions.

Prior to the pandemic, the FDA had never approved an mRNA vaccine before, but it’s now given emergency authorization for two: Moderna’s and a very similar COVID-19 vaccine developed by Pfizer and BioNTech.

That could open the door for more, and Moderna is hopeful that it’ll be able to follow up its COVID-19 success with an mRNA vaccine for HIV, among other diseases.

An mRNA Vaccine for HIV

HIV is uniquely difficult to vaccinate against because the virus mutates so frequently that it can evade the immune system’s defenses, but Moderna believes an mRNA vaccine for HIV could succeed where other types have failed.

On January 11, it announced the launch of a program focused on the development of two HIV vaccine candidates.

Moderna expects to launch phase 1 clinical trials for both HIV vaccine candidates in 2021.

Moderna’s first candidate, mRNA-1644, is a collaboration with the International AIDS Vaccine Initiative and the Bill and Melinda Gates Foundation. The company is evaluating the second candidate, mRNA-1574, in partnership with the National Institutes of Health (NIH).

The hope is that one or both of the vaccines will be able to protect against multiple strains of HIV, which could help overcome the issue of HIV evolving its way around the immune system.

Moderna expects to launch phase 1 clinical trials for both vaccines in 2021.

The development of an mRNA vaccine for HIV likely won’t happen as quickly as the one for COVID-19, given HIV’s extra complications — but even if Moderna needs years to develop a successful vaccine, it’ll be worth the wait.

Virology
Flu and RSV can fuse into a new kind of virus
In a new discovery, researchers at the University of Glasgow have observed hybrid viruses capable of infecting lung cells in the lab. 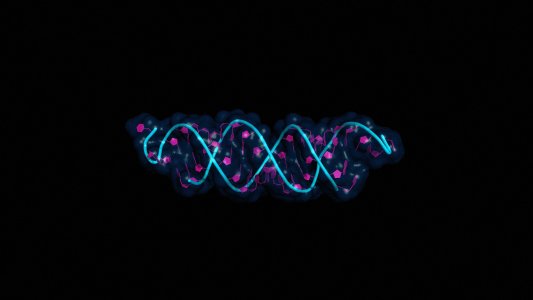 The technology used to make the COVID-19 vaccine could be used to treat other diseases too.

Coronavirus
Beyond COVID: mRNA vaccines may treat cancer and more
Subscribe to Freethink for more great stories
Subscription Center
Sections
Video
Freethink
Subscribe
We focus on solutions: the smartest people, the biggest ideas, and the most ground breaking technology shaping our future.
Subscribe