A paralyzed man can speak again, thanks to an experimental neuroprosthesis that translates his thoughts into words on a computer screen.

“To our knowledge, this is the first successful demonstration of direct decoding of full words from the brain activity of someone who is paralyzed and cannot speak,” lead researcher Edward Chang from UC San Francisco said in a press release.

The man with the new brain implant — who goes by the nickname “Pancho,” according to the New York Times — was just 20 years old when he experienced a stroke that left him with limited head, neck, and limb movement.

The stroke also damaged the connection between Pancho’s brain and his vocal tract, meaning he could no longer speak.

“Not to be able to communicate with anyone, it’s devastating.”

Every year, thousands of people go through Pancho’s ordeal, losing their voice to either illness or injury, and as he told the NYT via email, it’s an incredibly difficult experience.

“Not to be able to communicate with anyone, to have a normal conversation and express yourself in any way, it’s devastating, very hard to live with,” he wrote.

Following his stroke, Pancho communicated by using a pointer attached to a baseball cap to poke letters on a computer screen. People without even that amount of movement might use eye- or face-tracking tech to do something similar, spelling out words one letter at a time.

In either case, the process is slow — Pancho’s average was about five words per minute.

On the higher-tech end of the spectrum are systems that let people with paralysis use their minds to move a computer cursor over each letter on a screen.

Now, researchers at UCSF have invented a neuroprosthesis that translates thoughts directly into whole words, using a single electrode array.

The UCSF team enrolled Pancho as the first participant in their BRAVO (Brain-Computer Interface Restoration of Arm and Voice) study about three years ago.

They implanted an electrode array over the part of Pancho’s brain that’s active when we produce speech, connected to a cord that ran from Pancho’s head to a computer.

Over the course of several months, the researchers recorded 22 hours of brain activity while Pancho thought about saying 50 words.

Each word produced a slightly different pattern of brain activity, so the next step was developing an AI program that could quickly decode Pancho’s thoughts and display his intended word on a computer screen.

With that system in place, Pancho was asked to think about saying specific sentences using the words and, later, to respond to short prompts with them. An auto-correct function improved the system by using the context of the words to increase its accuracy.

By the end of the trial, the neuroprosthesis allowed Pancho to “speak” at a speed of about 15 words per minute with a median accuracy of 75%. His record high was up to 18 words per minute and up to 93% accuracy.

“We were thrilled to see the accurate decoding of a variety of meaningful sentences,” Chang said. “We’ve shown that it is actually possible to facilitate communication in this way and that it has potential for use in conversational settings.”

Pancho is now learning new words and working to improve his speed with his neuroprosthesis. The BRAVO researchers, meanwhile, plan to add more people to the trial — potentially helping others regain their voices just like Pancho has. 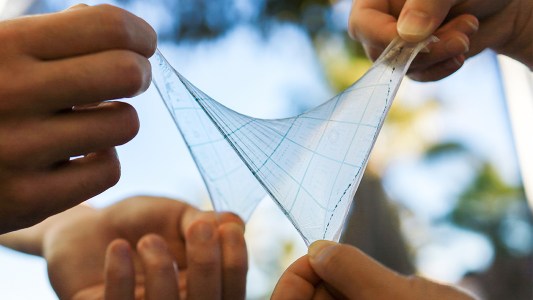