A new blood test for cancer can detect signs of the disease up to four years before symptoms appear, according to a new study published in Nature Communications.

Early detection can significantly increase a cancer patient’s chances of surviving the disease, so if the study’s findings hold up in larger studies, the test could one day save countless lives.

A New Blood Test for Cancer

Researchers at Fudan University in China led the development of the new blood test for cancer, which they call “PanSeer.”

The test works by screening a blood plasma sample for signs of tumor DNA. A machine learning algorithm then analyzes the data from the screening to predict the likelihood that the blood sample is from someone with cancer.

To develop and test the new blood test for cancer, the researchers needed blood samples, so they turned to the Taizhou Longitudinal Study, which collected blood from more than 120,000 people once a year for a decade.

From that study, they sourced 605 samples from people who, at the time of collection, showed no symptoms of cancer. However, 191 of them did develop one of five types of cancer (stomach, esophageal, colorectal, lung, or liver) one to four years after collection.

The researchers then sourced samples from an additional 223 patients who had already been diagnosed with cancer at the time of collection, as well as 200 tumor and healthy tissue samples

After using half of their samples to train PanSeer, they used the rest to test the system — and found that it could detect cancer in 91% of the samples from people who were asymptomatic at the time of collection but went on to develop the disease.

Usha Menon, a professor of gynecological cancer at University College London, who wasn’t involved in the study, told Scientific American that the researchers would likely need to develop a secondary screening method to weed out the false positives — but PanSeer could eventually serve as a useful “baseline” test.

“The authors are not suggesting that they have a test that can be used clinically at this stage,” she said. “They are clear that what they have is a robust preliminary demonstration of early detection of multiple cancer types four years prior to conventional diagnosis.”

PanSeer isn’t the first blood test for cancer, but past studies have only proven that a test can detect the disease in people who’ve already been diagnosed — meaning they’re as good as existing cancer screening methods, but no better.

PanSeer could one day provide a non-invasive way to catch cancer almost as soon as it develops.

The use of the Taizhou Longitudinal Study samples allowed the PanSeer group to show that their new blood test for cancer could spot signs of the disease long before a person had any indication of it.

If the researchers’ findings are validated by larger studies, PanSeer could one day provide doctors with a non-invasive way to test patients for cancer — and hopefully catch it almost as soon as it develops, when treatment is more likely to be effective.

“The ultimate goal would be performing blood tests like this routinely during annual health checkups,” researcher Kun Zhang from the University of California San Diego said in a press release. “But the immediate focus is to test people at higher risk, based on family history, age or other known risk factors.” 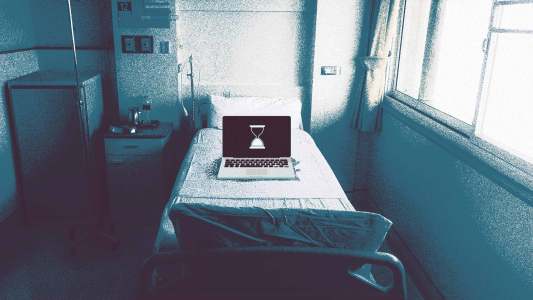 AI
End-of-life AI
By B. David Zarley
Subscribe to Freethink for more great stories
Subscription Center
Sections
Video
Freethink
Subscribe
We focus on solutions: the smartest people, the biggest ideas, and the most ground breaking technology shaping our future.
Subscribe