Losing excess weight is notoriously difficult — but a new obesity treatment could make it significantly easier.

The treatment is an injectable drug called semaglutide, and it’s already approved for use by people with Type 2 diabetes as a way to control their blood sugar levels.

A recent clinical trial found that, in higher doses, it can also help overweight or obese people shed an average of 15% of their body weight — other currently approved weight-loss medications typically result in a loss of just 6% to 11%.

“This is by far the most effective intervention we have seen for weight management when you compare it to many of the currently existing drugs,” researcher Robert Kushner said in a press release. “Semaglutide sets the bar for a new generation of more effective weight-loss medications.”

Doctors use the body mass index (BMI) — a value based on height, weight, and gender — to determine whether a person is overweight or obese. It’s not perfect, but people with BMIs between 25 and 30 are generally considered overweight, and those with BMIs above 30 are categorized as obese.

Having a BMI in the overweight or obese range typically increases a person’s risk of developing many health problems, including heart disease, Type 2 diabetes, and certain cancers.

More than 70% of Americans are either overweight or obese, meaning the majority of the country falls into these at-risk categories.

That’s not only concerning for those individuals, but also the nation as a whole — in 2018, researchers estimated that excess weight costs the U.S. hundreds of billions dollars a year in direct healthcare expenses.

The good news is that losing weight can help alleviate many of the health issues associated with being overweight or obese.

The bad news is that losing weight and keeping it off can be difficult due to a variety of biological, psychological, and environmental factors.

Medications can help people lose weight, but those drugs are controversial — the FDA has recalled several after approval due to side effects. Additionally, if people stop taking the drugs, the weight often comes back.

Bariatric surgery has been shown to help people lose an average of 25% to 30% of their body weight, but because it’s invasive, less than 1% of people who qualify for the obesity treatment go through with it — and many of those that do end up gaining back the weight they lost anyways.

Clearly, there’s a need for a better obesity treatment.

Nearly 2,000 overweight or obese adults, in 16 countries, participated in the clinical trial of semaglutide.

Once a week, each participant injected themselves with either a placebo or a dose of semaglutide. Once a month, they met with a registered dietitian, who provided guidance on diet, exercise, and motivation.

During the course of the 17-month study, all participants received incentives — such as exercise equipment or food scales — when they met goals.

This is by far the most effective intervention we have seen for weight management.

More than a third of the people who received the obesity treatment lost at least 20% of their body weight.

Side effects to the treatment included nausea, diarrhea, and vomiting, but they were mild-to-moderate in severity and usually temporary.

The FDA is now considering whether to approve semaglutide at the higher dose needed for it to be an effective obesity treatment. If approved, the drug would be intended for long-term use — when people in the trial stopped taking it, their weight came back.

Even if approved, though, some people might not be able to benefit from semaglutide.

When used as a diabetes treatment, a monthly supply of the medication costs almost $1,000, At the higher dosage, the retail cost would be even higher, and while some insurance companies do cover weight-management drugs, others don’t.

Additionally, some people might be squeamish about injecting themselves with a drug, even one that could help them lose weight.

With the number of overweight and obese Americans continuing to climb, though, any treatment that could make it easier for people to safely lose weight — and keep it off — is worth pursuing. 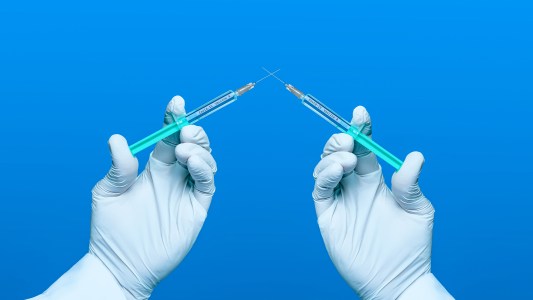