Paige Rogers is 22, but her lungs function like they’re in their sixties, on a good day.

She was born with cystic fibrosis, a progressive genetic disease that causes the body to produce too much mucus. It’s relatively rare – only about a thousand new cases are diagnosed in the U.S. each year – and treatment is focused on managing symptoms and complications. There is no cure.

“I consider my CF to be pretty mild,” Paige said, before describing her daily health care routine, which includes 16 pills, chest physical therapy to loosen mucus, breathing treatments, plus intravenous antibiotics when she has a lung infection, which has been the case for much of her life.

At age two, she was diagnosed with pseudomonas, a type of bacteria that is found in a lot of different plants, dirt, and water. It doesn’t make most people sick, but in a person with CF, the bacteria can embed in the mucus and create a sort of matrix, or biofilm, that keeps the patient infected for months or years.

For much of Paige’s life, this has meant organizing everything – work, school, concerts, parties – around the delicate and lengthy process of receiving IV antibiotics, not to mention the constant fatigue and weakness that come with CF.

“It hinders her in a lot of ways,” said Corey Rogers, Paige’s father. “When she was younger, we’d walk into a restaurant and if there was somebody smoking, we left. Cold weather – we tried to keep her away from that. Any paint fumes, perfumes. She didn’t get to hang out with a whole lot of kids her age.”

Paige is a realist about her condition, calmly stating the fact that it will likely limit her life. But she also has goals she’s determined to meet. She wants to be a nurse someday. She also hopes to be a mother. That would require getting her lung function up to between 80 and 90 percent. Some days, this feels more possible than others.

In 2014, Paige’s pseudomonas treatment stopped working. She tried antibiotic after antibiotic, but for three years, her lungs and sinuses remained under attack. The constant battle to beat the bacteria had backfired: it was now antibiotic resistant. And on top of that, Paige had become allergic to many of the antibiotics themselves.

“There’s a war going on in my body, basically,” she said.

Antibiotic medications were one of the most important discoveries of the 20th century, and they have saved countless lives thanks to their ability to decimate colonies of bacteria. But scientists have long recognized two problems with this: not all bacteria are bad, and many have evolved to fight back against medications. The World Health Organization now considers antibiotic resistance one of the biggest threats to global health. It’s a dangerous problem for healthy people, let alone those with conditions like CF.

In May 2017, Paige was hospitalized, and her doctor – Dr. Kanu Adaobi – set to work clearing out mucus from her lungs. The mucus was too thick, which caused bleeding, and Paige ended up in intensive care. After the procedure, her lung function dropped to 44 percent – dangerously low.

“Seeing what that was like was extremely hard,” she said. “I couldn’t even do things like take a shower by myself. Whenever I lifted my arms up to wash my hair I was so out of breath. I needed help with absolutely everything.”

She realized with horror that this could be the rest of her life.

Around this time, Corey read a story about someone in the Republic of Georgia using bacteriophages – viruses that attack and kill certain types of bacteria – to treat pseudomonas. Bacteriophages, or phages, are more precise than antibiotics, but they were also experimental. He took screen shots of the article and sent them to Paige and her mother, Jolene. They humored him, but ultimately didn’t think much of it. It seemed too good to be true. And besides, it was halfway across the world.

Then Paige had a terrible reaction to an antibiotic she was taking. Her eyelashes fell out, her skin became extremely dry and itchy, and the drug depleted her gut biome, leaving her with a new infection.

“I still wasn’t jumping for joy (about the phages),” she said, “But I knew I had to at least try.”

Corey emailed Dr. Adaobi. She emailed an expert in bacteriophages at Yale University named Ben Chan. The team applied to the Food and Drug Administration for an Emergency Investigational New Drug permit. A date was set: December 12, 2017.

Ben Chan has a refrigerator full of sewage. He’s gathered samples from the U.S., Mexico, Haiti, and several African countries in search of potentially therapeutic bacteriophages. These viruses are literally everywhere – “more numerous than the stars,” Chan says – but when you’re looking for one that eats a specific type of bacteria, you have to go to where that bacteria lives.

That’s how Chan ended up with little containers of sewage from both Connecticut and the Congo that could potentially devour Paige’s pseudomonas.

To make Paige’s phages, Chan isolated the various strains of bacteria from a sample of her sputum, grew them in cultures, and then tested different phages on them to find a match. Satisfied that he had, Chan hopped on a plane with a Styrofoam box containing tubes of phages. It would be the first time he’d watched a patient breathe in a phage of his making.

Meanwhile, Paige was preparing herself. She made sure someone would have an EpiPen on hand in case she had an allergic reaction. She thought about the strangeness of being in a sterile room where everyone else would be wearing protective masks as she inhaled a virus.

“I’ve always joked to my parents that I’m an experiment,” she said. “I’m just like one giant guinea pig. It’s kind of cool.”

Paige did not need her EpiPen, but the phages worked more slowly than she or Chan had hoped. January went by, and nothing changed. In February she got sick and had to go back on IV antibiotics. She couldn’t work for most of the month. She thought the phages might have made her worse.

Then, in March, her lung function suddenly improved, reaching the mid-70s. Her doctor said most of her pseudomonas bacteria had gone from being resistant to antibiotics to being sensitive to them. They were still here – she still had infections – and her lung function wasn’t anywhere near perfect, but she felt more able to live a normal life.

For the first time in three years, she went three days without napping. She took family trips to Georgia and South Carolina. A third trip to Connecticut left her needing IV antibiotics again, but she noticed that they worked more quickly than in the past. Her last phage treatment was in May. Her last IV treatment was in July – it was the longest she’d gone without an IV in three years.

Chan and Paige are still regularly in touch. She reports to him that she’s generally happy and energetic, and still hopes to get her lung function to the 80s, even if her pseudomonas is never totally eradicated. With better lung function, she hopes she can live longer.

Chan is honest about the possibility that pseudomonas bacteria could eventually become resistant to the phages, too (though some recent research suggests this is less likely than antibiotic resistance). But the success of Paige’s phages could also open the door to new treatments for people around the world with CF and other chronic diseases.

Recently, Paige’s boyfriend Casey came home to find her deep-cleaning the house; a little shocked, he asked what she was doing.

“I have so much energy that I’m bored,” she said. “I need to do something.”

Virology
Flu and RSV can fuse into a new kind of virus
In a new discovery, researchers at the University of Glasgow have observed hybrid viruses capable of infecting lung cells in the lab.
Up Next 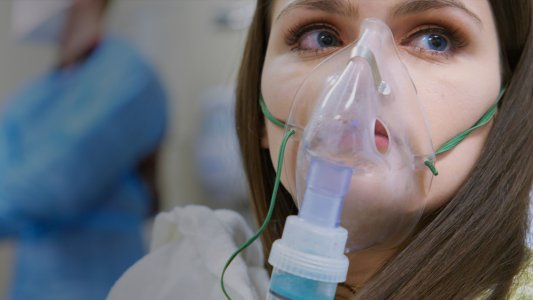