While scientists, researchers, and vaccine manufacturers — from the multinational to the relatively minuscule — attempt to run down a COVID-19 vaccine in haste, hope for some kind of answer to SARS-CoV-2 may lie in vaccines of the past.

There are growing hints that live attenuated vaccines — like the oral polio vaccine (OPV), the Bacillus Calmette-Guerin (BCG) vaccine against tuberculosis, and the measles, mumps, rubella (MMR) vaccine — may offer some form of protection against COVID-19.

Such vaccines, containing live but weakened viruses or bacteria, are generally thought to provide some measure of protection against diseases that they were not designed to target. The theory is that live vaccines, such as MMR, spark a broader immune response that helps fight off infections in general, not just the specific diseases they are intended to prevent.

Generally proven safe (although there are some risks, and we’ll get there) and in ready supply, some scientists are pushing to deploy these existing vaccines to try to fight the most powerful new virus since HIV.

Vaccines provide protection against a certain disease by priming the immune system to recognize its signature, thereby putting up the WANTED posters and mobilizing the posse well before it strolls into the saloon looking for trouble.

There’s a couple ways to do this. One is to create a vaccine using only parts of the pathogen (like pieces of a bacteria or virus) that contain its signature antigen, instead of introducing the immune system to the whole pathogen itself. This tends to provoke fewer side effects but also less immunity.

Another way — called an inactivated vaccine — takes dead viruses (well, insomuch as a virus is “alive”) or bacteria and tosses the whole carcass at the immune system, like raw chicken at Alligator Adventure.

The most intriguing one, in this case, is called a live attenuated vaccine. This one uses the whole pathogen too, with one obvious difference: rather than being made inert, the virus is weakened until it is a shadow of its former self — a pale imitation of the wildtype pathogen.

Such viruses are too weak to harm the vaccinated person, but can still train the immune system to recognize the real thing.

After decades of use, evidence has mounted that live attenuated vaccines not only provide immunity against their specific disease, but also provide a general level of protection against an assortment of invaders.

All vaccines spark antibodies against their specific diseases (your “adaptive” immune system), but live vaccines also stimulate your innate immune system. Adaptive immunity is kind of like a team of spies, targeting specific pathogens and sounding the alarm when they are found, while the innate immune system is like your standing army, which fights off any and all infections.

Years of evidence suggests that some live vaccines, like those against measles and tuberculosis, actually provide broad protection against other diseases by stimulating this innate system.

A 2011 study of low birth-weight babies in Guinea-Bissau found that those who had been vaccinated with the BCG tuberculosis vaccine had dramatically lower death rates — lower than can be explained by protection against tuberculosis by itself. In 2017, the WHO released a report that deemed the vaccine was “associated with a reduction in all-cause mortality of approximately 50%.”

A recent preprint analysis of high- and medium-income countries found that those that did not have (or had abandoned) a universal vaccination program with BCG had more infections — and deaths — per capita, the New York Times reports. (However, this result is disputed by another preprint paper.)

In the 1950s, the Soviet virologists Marina Voroshilova and Mikhail Chumakov demonstrated the oral poliovirus vaccine’s general immunity benefits, testing the vaccine not only on themselves but on their children. Voroshilova discovered the connection between OPV and general immune protection when she noticed that people who had been vaccinated against polio had a lower chance of dying from the flu — even though the vaccines were not designed against flu.

In Russia, a study is now underway to test the ability of OPV to protect against severe COVID-19.

Other researchers are proposing using the MMR vaccine for protection against COVID-19, prompted by evidence that the vaccine can provide general protection against sepsis and inflammation — one of the severe complications of COVID-19.

The USS Roosevelt may be evidence for MMR’s ability to thwart the coronavirus. The 995 sailors who tested positive all presented with mild symptoms, a result the American Society for Microbiology attributes to the Navy’s universal MMR vaccinations.

“A clinical trial with MMR in high-risk populations may provide a low-risk-high-reward preventive measure in saving lives during the COVID-19 pandemic,” LSU’s Paul Fidel said in the release.

“While we are conducting the clinical trials, I don’t think it’s going to hurt anybody to have an MMR vaccine that would protect against the measles, mumps, and rubella with this potential added benefit of helping against COVID-19.”

While these live attenuated vaccines have been used for decades on billions of people — saving countless lives — there are risks to their use, especially as an off-label protection against COVID-19.

Because the vaccines are live-but-weakened viruses or bacteria, they should not be given to immunocompromised individuals. With their immune systems depressed, even the attenuated pathogens could still cause disease — and, in any case, they couldn’t spark broad immunity when the broad immune system is compromised.

There is also a fleetingly rare chance that the poliovirus used in OPV doses can mutate, actually causing polio. This is extremely rare, but it is a risk to suddenly spinning up widespread polio vaccination, which hasn’t been done in most countries in decades, as there is no risk of getting polio naturally today (outside of a handful of countries where it is still endemic).

Turning to the live attenuated vaccines that have carried humanity to great victories against diseases in the past is not without risk.

But with reams of research suggesting their safety and efficacy, stockpiles at the ready, and manufacturing capable of scaling up fast, these weakened former foes may be our best allies, stemming the tide while science races to develop a true COVID-19 vaccine.

Coronavirus
Researchers may have created a universal coronavirus vaccine
All currently licensed COVID-19 vaccines target the spike protein’s S1 region, which is prone to mutations. We need a universal vaccine.

Coronavirus
MIT just created a test that can tell if you’re immune to COVID-19
MIT researchers have developed an easy-to-use test that may be able to predict an individual’s immune response to SARS-CoV-2.
Up Next 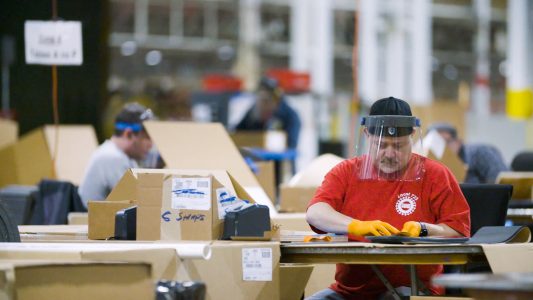 Ford Motor Company is putting its equipment and employees to work to counteract the extreme ventilator shortage caused by the COVID-19 pandemic.

Coronavirus
Ford factory workers rally to build ventilators for a nation in need6:05
Subscribe to Freethink for more great stories
Subscription Center
Challenges
Video
Freethink
Subscribe
We focus on solutions: the smartest people, the biggest ideas, and the most ground breaking technology shaping our future.
Subscribe