Restoring vision to the blind was once believed to take a miracle. Now, researchers have demonstrated that restoring limited vision to people suffering from retinitis pigmentosa, a historically permanent type of blindness, is within reach.

Doctors used gene therapy, and a pair of special goggles, to return partial vision to a blind person, using a process called optogenetics.

What caused the blindness: Retinitis pigmentosa is caused by a genetic mutation that breaks down light-sensitive photoreceptor cells. The cells normally would absorb and translate light into brain signals.

The genetic condition is considered rare but still affects about two million people in the world.

The 58-year-old man involved in the study had his vision destroyed by the disorder; he could still sense the presence of light but couldn’t make out what he was seeing.

How it was partially restored: In the field of optogenetics, researchers use gene therapy to alter the eye to produce light-sensitive proteins (called channelrhodopsins). For this study, the doctors used a combination of gene therapy and a pair of special goggles to help the man with retinitis pigmentosa see light and shapes again.

They used AAV gene therapy, where a disabled virus particle is used as a delivery vehicle for a beneficial payload. In this case, a mixture of genes for light-sensitive proteins delivered right to his damaged retina cells, in his worst-seeing eye.

Seeing is believing: The team reports that their groundbreaking gene therapy was effective in partly reversing the man’s retinitis pigmentosa and restoring some vision — 40 years after he had lost most of it.

With a pair of special goggles, which use light bursts to stimulate his vision, he could see surrounding objects, discern between them, and even reach out and touch them — things he could not do before the treatment.

“The light-stimulating goggles capture images from the visual world using a neuromorphic camera that detects changes in intensity, pixel by pixel, as distinct events,” the researchers wrote in a paper published in the journal Nature Medicine.

“This is the first-ever patient that is reporting any kind of improvement through optogenetics,” lead researcher Dr. Jose-Alain Sahel, chairman of ophthalmology at the University of Pittsburgh, told Medical XPress.

An EEG reading, a test that detects electrical activity in the brain, revealed that the visual center of his brain received information from his treated eye. Furthermore, these gains persisted five months after the initial therapy, reports Gizmodo.

“It’s exciting. It’s really good to see it working and getting some definite responses from patients,” David Birch, a retinal degeneration expert at the Retina Foundation of the Southwest in Dallas who wasn’t involved the in the study, told Science News.

Although the researchers note that more testing is needed before this type of therapy can be approved for use on patients with retinitis pigmentosa, the results are encouraging. For people who are almost entirely blind, optogenetics and light-stimulating devices could be the answer.

Editor Note: This article has been updated to include the last video: Reversing Blindness. 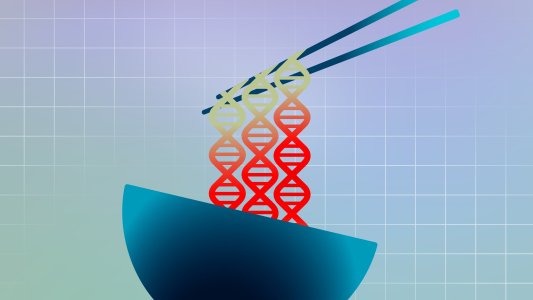 Healthcare
The DNA-based diet you’ll be hearing about everywhere
Subscribe to Freethink for more great stories
Subscription Center
Sections
Video
Freethink
Subscribe
We focus on solutions: the smartest people, the biggest ideas, and the most ground breaking technology shaping our future.
Subscribe