In late March, the city of Raleigh, North Carolina, was in the middle of a pollen explosion. Thick yellow clouds could be seen from a distance, and the stuff covered every outdoor surface in a quarter inch of dust. But that didn’t stop Dr. Stuart Ginn and his team at WakeMed Health from making their first airborne blood sample delivery with a medical drone.

The trip, from Capital City Surgery Center on one side of Sunnybrook Road to the main campus of WakeMed Health on the other, took about five minutes. The day before, the same trip would have taken anywhere from 20 minutes to two hours, depending on when a courier trained to carefully handle blood specimens could arrive, how many other stops they needed to make before delivering the samples to WakeMed’s main campus, whether they were traveling by foot or by vehicle, weather, and traffic.

Since this initial test run in March, hundreds of these drone courier trips have been successfully completed. At a larger scale, these drones could save the healthcare system a lot of time and money in the near future. Matternet, the Silicon Valley-based drone company working with WakeMed on the pilot, claims it can help a hospital save 20-50% on courier costs. And Matternet does have a track record: in 2017 it helped Switzerland become the first developed nation to build a permanent medical drone network. (Rwanda beat Switzerland to it with help from another drone company called Zipline.)

However, turning this opportunity into a reality requires that drone programs like the one at WakeMed happen at more hospitals around the country. It’s too soon for WakeMed to have real numbers on its own savings from the program, but Ginn, who directs the program, said the first goal is to prove that medical drones can be used safely and efficiently.

The WakeMed drone program is part of a pilot being administered by the Federal Aviation Administration aimed at testing out whether drone flights like this can happen at scale in the United States. The FAA reviewed nearly 150 proposals from transportation departments, cities, and airport authorities around the country before choosing nine sites for the pilot program last year. In addition to North Carolina, medical drone pilots are taking place in Alaska, California, Nevada, North Dakota, Kansas, Oklahoma, Tennessee, and Virginia.

The projects range from medical sample delivery to border patrol to agricultural surveying, with the collective goal of identifying the biggest benefits and risks of drone use and accelerating the approval process for drone programs that will be the most beneficial. The programs are also meant to help get people in local areas around the country used to the idea of delivery and industry drones buzzing overhead.

“If it proves scalable – from a safety and technology perspective – and if there is a substantial business case to boot, then of course we would be interested in replicating the system in the broader market,” Ginn said.

Creating Efficiency in the Healthcare Industry

Right now, WakeMed’s pilot involves just one drone going back and forth across the street several times a day. Transfering the process of moving blood samples and other medical supplies from helicopters and trucks to networked fleets of unmanned aerial vehicles would create efficiency in an industry that desperately needs it. A recent analysis by the Johns Hopkins Bloomberg School of Public Health confirmed the longstanding belief that the United States spends much more on healthcare than other developed countries, in part because of the high costs of hospital administration. The movement of blood samples and medical supplies isn’t solely to blame but it plays an important role, making up about 2 percent of healthcare spending overall but influencing 29-38% of primary care medical decisions, and more in emergency situations.

“It’s well-known in the healthcare and logistics world that last-mile logistics is dirty and expensive and difficult,” said Ginn, referring to the final step of a delivery process that gets the item to the door of the person who needs it. “We use trucks and vans to take very, very small packages in a very inefficient way around our campuses. We optimize the routes and use couriers, but we don’t have much control over it. When you’re dealing with a blood sample that a physician or provider decides a patient needs as a data point to further their care, the more efficiently we can manage that and turn that around, the better.”

In developed areas, setbacks in that last mile can be the cause of inefficiencies because of product damage and delivery delays; in rural and underdeveloped areas, couriers face those same problems in addition to infrastructure challenges and sometimes difficult navigation.

The FAA’s pilot participants are hoping to address these problems, among others, in a way that will not only make medical drones more common and accessible, but also open the door to drone deliveries of all kinds in the U.S., including deliveries from companies like Amazon and Alphabet, the latter of which is working on a pilot test in Virginia. Both companies have been promising drone delivery for several years but their plans have been stymied by regulation.

“It’s not a coincidence it’s happening in healthcare first,” Ginn told Freethink. “We have to demonstrate that there’s more than just a potential economic development benefit – you have to have a public benefit for this technology, which still has PR problems in some people’s minds.”

Both the excitement and fear surrounding delivery drones stem from the fact that the skies below where planes fly are somewhat uncharted territory. There are a lot of potential issues that could arise, such as privacy breaches and technical malfunctions that the FAA is having to grapple with. In response to the privacy concerns about drones that capture video and photo, the FAA has created regulations mandating that the drones are flown below 400 feet and within line of sight of the operator. Drones must also be under 55lbs in weight, according to FAA rules.

The rules are the same for medical drones, according to James Pearce, deputy secretary for communications at the North Carolina Department of Transportation (NCDOT). The WakeMed drone flies with a special FAA waiver at an altitude of 150-250 feet on a set route, at least for now.

Looking to the future, should the pilot be successful, Freethink asked Pearce whether the NCDOT would create something like a “drone highway,” designated lanes in the air for drones – whether or not they’re delivering medical samples or supplies, to keep things under control. “That’s exactly right,” he said. The department has been working with a company called AirMap to develop an unmanned traffic management system that would allow it to see every drone and other aircraft in the air at one time.

As the United States works out logistics for a potential medical drone fleet, California-based drone-maker Zipline has established outposts in Rwanda and Ghana where “last mile” logistics can be not only inefficient, but it can be deadly when a broken down vehicle or bad weather keeps medicine or vaccines from getting where they need to go. In countries with weak infrastructure, such as Rwanda, research shows that people in rural areas often have difficulty making it to the doctor for blood work or vaccines.

Zipline trains locals to operate small plane-like drones, launching them from several distribution centers laden with medical supplies in small boxes equipped with parachutes. Justin Hamilton, a spokesman for Zipline, said the company’s drone delivery service costs are on a par with the current cost of delivering by car or motorcycle, but Zipline can do it faster and more reliably. The company claims to have helped save thousands of lives in Rwanda while decreasing blood waste and increasing access to rare blood products by 145%.

“Whether you live in the developed world or the developing world, the further you travel outside of a major city, the harder it is for you to access the medicine you need to stay healthy and alive,” Hamilton said.

What’s true in Rwanda is also true in the United States, where rural hospitals have been closing at an alarming pace in recent years. Drone-makers, along with hospitals and the FAA, may be able to help fill that gap.

If you’re interested in learning about how the World Health Organization prioritizes where medical technology—including medical drones— is deployed in developing nations around the world, check out Freethink’s recent video: “Preparing For Outbreak.” 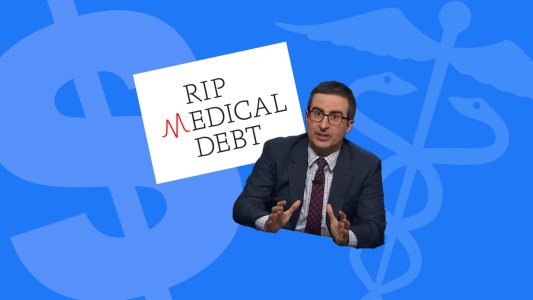 These ex-bill collectors got John Oliver’s attention and started a movement. They’re buying hundreds of millions of dollars worth of strangers’ medical debt and erasing it.