As the virus behind COVID-19, SARS-CoV-2, continues to proliferate around the world, it is accruing more and more mutations.

Like any organism, most mutations damage the coronavirus, and those crippled viruses will rapidly die out.

Every now and then, though, these SARS-CoV-2 mutations will hit upon a winning variant that proves beneficial to the virus. When that happens  — as it seems to have in the U.K., South Africa, and Manaus, Brazil — those virus variants may out-compete the old strains and take over.

These mutations appear to be helping the coronavirus attach better to human cells, as well as partially evading antibodies to prior strains.

A team led by researchers at the University of Pittsburgh School of Medicine has uncovered how those SARS-CoV-2 mutations are happening: the virus is deleting portions of its genetic sequence that control the spike protein.

This infamous little protein, which resembles an armor-clad pin with a drunken wobble, is how the virus gets into the cells; it’s also the main target of coronavirus vaccines (as well as antibodies created by infection).

Understanding just how it is changing may help us prepare better treatments and vaccines to fight back against new strains.

Every article you read on Freethink goes through an editorial process, meant to identify grammatical, spelling, and — most importantly — factual errors. SARS-CoV-2 mutations must slip past something similar: the virus’s proofreading mechanism.

Coronaviruses are RNA viruses. As their name suggests, these viruses use RNA to pass their genome into hijacked cells. RNA viruses — which include such beasties as influenza, Ebola, and rabies among their ranks — are notoriously good shapeshifters, picking up genetic mutations at a faster clip than their DNA-based cousins.

But coronaviruses differ from their RNA relatives in a number of ways. They’re fairly large, as viruses go, but what really sets them apart is their massive genome. At 30,000 genetic bases, coronaviruses have the largest genomes in the RNA virus family, according to Nature; that’s twice as many as influenza, and three times more than HIV.

This wooly genome is kept in check by an unusual tool for an RNA virus: a genomic proofreading mechanism. Proofreading mechanisms identify and fix problems in the genetic code of a virus. When viruses lack these mechanisms, like the flu, they mutate much more rapidly, giving them both more opportunities for beneficial mutations — as well as more chances to fail. (This is why you need a new flu shot every year.)

Coronaviruses, however, don’t seem too into the genetic roulette thing.

But, if the virus has this proofreader, how are SARS-CoV-2 mutations slipping by?

Paul Duprex, director of the University of Pittsburgh’s Center for Vaccine Research, revealed the answer in the university’s press release.

According to Duprex and company, SARS-CoV-2 mutations are being driven by deletion.

The virus is eliminating parts of the genome that control the shape of the waggling spike protein, with the end result being the ability to evade some of the antibodies created to glom onto the prominent weapon.

Because the mutations are, well, not there, there’s nothing for the proofreader to fix. And when natural selection stumbles across a beneficial change, sure enough, you’ve got a coronavirus variant well-equipped to out-compete its brethren (viruses being the ultimate believers in meritocracy).

Worse, changes to such a critical piece of the virus can also make it harder for our immune systems to recognize it as the same familiar foe.

“Once it’s gone, it’s gone, and if it’s gone in an important part of the virus that the antibody ‘sees,’ then it’s gone for good,” Duprex said.

Since submitting their paper, published in Science, for preprint this past fall, the researchers have seen their discovery come to horrific life: the B.1.1.7 and B.1.351 variants, first identified in the U.K. and South Africa, both have these SARS-CoV-2 mutations-by-deletion.

Duprex’s team first came across significant coronavirus deletions in samples taken from an immunocompromised patient who battled the virus for 74 days before ultimately succumbing. As the release put it, that’s a long time for the virus to play cat and mouse with the immune system — and a lot of pressure to develop mutations to win the game.

Duprex then drafted flu expert Kevin McCarthy for help determining if the SARS-CoV-2 mutations found in their patient were one-offs, or part of a trend.

McCarthy and his colleagues turned to the ever-growing databases of SARS-CoV-2 genetic sequences being collected around the world, and a pattern emerged: deletions, over and over again, in the same spot — a place where a change in the spike protein’s shape wouldn’t cause any problems in rending open our cells.

“Evolution was repeating itself,” McCarthy said. “By looking at this pattern, we could forecast. If it happened a few times, it was likely to happen again.”

The research suggests that the virus may, indeed, one day slip our current weapons — which is why researchers are already beginning to craft new ones, like Moderna’s South African strain vaccine booster.

“How far these deletions erode protection is yet to be determined,” McCarthy said. “At some point, we’re going to have to start reformulating vaccines, or at least entertain that idea.”

These SARS-CoV-2 mutations don’t provide a perfect escape, however. For one thing, antibodies — while important — are far from the only cells in the immune system tasked with hunting, marking, and destroying viruses. And while these deletions may help the virus escape from some antibodies, it won’t keep them invisible to all of them.

Virology
Chickenpox and shingles virus lying dormant in your neurons can reactivate and increase your risk of stroke
People with shingles have an approximately 80% higher risk of stroke than those without the disease, and researchers want to know why.
By Andrew Bubak
Up Next 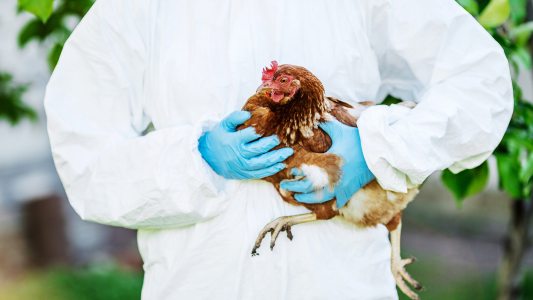 Virology
A new bird flu is infecting people. Here’s what we know.
By Kristin Houser
Subscribe to Freethink for more great stories
Subscription Center
Sections
Video
Freethink
Subscribe
We focus on solutions: the smartest people, the biggest ideas, and the most ground breaking technology shaping our future.
Subscribe