As with, well, basically every aspect of America’s disjointed and deadly response to COVID-19, vaccine distribution has fallen woefully short of stated government goals, as a patchwork of localities are tasked with delivering jabs in a maddeningly complex, unsettled situation.

Writing in the Washington Post, UC San Francisco Department of Medicine chair Robert M. Wachter and Brown School of Public Health dean Ashish K. Jha lay out their case for a “first doses first” approach, giving as many people as possible one shot before we start giving out booster shots:

Coming amid this odd mix of hope at having vaccines and frustration at the difficulty of administering them, some experts are suggesting delaying the second doses of the Pfizer and Moderna vaccines and using them to instead give more people their first dose; essentially, doubling how many people you can vaccinate instantly.
Until recently, we supported the strict vaccine regimen, requiring two doses within a month. Both the Pfizer and Moderna clinical trials were carried out this way, and the much-touted 95 percent efficacy rates were drawn from those trials.

But as Mike Tyson famously said, “Everybody has a plan until they’ve been punched in the mouth.” When it comes to covid-19, we’re being punched in the mouth over and over again. It’s time to change the plan; namely, we should give people a single vaccination now and defer their second shot until more doses of vaccine become available.

It’s an idea that holds obvious appeal: it could instantly double the supply of available doses. It also has drawn pushback, because that’s not how the vaccines were studied.

The U.K., wracked by skyrocketing case counts and an apparently more transmissible strain of the virus, has decided they will potentially delay second doses by months, in order to get more people partially protected right now.

The FDA, meanwhile, says no dice to changing the game plan at the moment, although studies to analyze whether Moderna’s doses can be cut in half — another way to effectively double the supply — are underway. (The results, the New York Times reports, are expected in a couple months).

CNN reports that President-elect Joe Biden, however, plans to release all the doses held in reserve by the federal government to the states when he takes office.

“The President-elect believes we must accelerate distribution of the vaccine while continuing to ensure the Americans who need it most get it as soon as possible. He supports releasing available doses immediately, and believes the government should stop holding back vaccine supply so we can get more shots in Americans’ arms now,” Biden transition spokesman TJ Ducklo said in a statement.

So, what exactly is the plan?

The Case For Delaying Doses

The main thrust of why experts are suggesting delaying doses — or administering half-doses — is this: it’s a numbers game.

Wachter, Jha, and others believe those extra 5 million people vaccinated, even if they have only partial immunity, would do more to stop the spread and save lives faster than boosting immunity for half as many people.

They argue that the slower-than-expected production and, even worse, distribution are proving to be a massive bottleneck, making it difficult to vaccinate people in the U.S. as quickly as possible. Delaying boosters would help speed up that rollout.

The main thrust of why experts are suggesting delaying doses — or administering half-doses — is this: it’s a numbers game.

The U.K. agrees. Per The Guardian, health officials will now delay the second dose of a vaccine for up to 12 weeks; that dose can also come from any of the three vaccines cleared for use — Moderna, Pfizer, or Oxford/AstraZeneca, which has been approved across the pond.

A model by researchers from the University of Toronto and Stanford shows that a flexible approach, which prioritizes giving out first shots over boosters, would reduce the number of COVID-19 cases by 23% to 29% compared to sticking to the rigid schedule for boosters.

Their results held up across a range of different scenarios for “vaccine supply, relative protection from the first dose, and waning efficacy given delayed second dose.”

According to the FDA’s report on the Moderna vaccine, an earlier 600-person study found that two 50-microgram doses of the vaccine produced essentially the same immune response as two 100-microgram doses — at least in people under age 55 — a month after the second dose.

Of course, a deviation from the original plan — and how the vaccines were both studied and approved — has raised concerns. Among them are fears that immunity could wane between people’s first and second shots.

Wachter and Jha address this in their article. Since the vaccines have not been studied without their boosters, we do not know for sure when immunity will begin to weaken. But they believe the results from those studies, for example data from Moderna, is “reassuring.”

“It shows robust immune response four weeks after the first shot, and most experts believe it is extremely unlikely immunity would somehow plummet by week eight or even week 12 following a single shot,” they wrote.

They are also not suggesting we drop the second shot altogether; we just coast on that first one, get as many out the door as possible, and then deliver the second when we’re better equipped to.

Wachter laid out what he considered the most serious scientific concerns in a Twitter thread.

He identified three main concerns: that “partial immunity” could encourage harmful mutations; that people will not get their second jab; and whether such a dramatic shift in strategy could further shake people’s confidence in vaccination and public health messaging.

Viruses mutate. It’s what they do. There is the possibility that a delayed dosing strategy could apply evolutionary pressure to SARS-CoV-2 that would make it more likely to mutate and escape the vaccine.

“If we want to generate difficult viral escape mutants in the lab (e.g. for epitope mapping), we subject the virus to low antibody pressure and then slowly move up,” Florian Krammer, professor of vaccinology at Icahn School of Medicine, wrote on Twitter.

“A little bit like after one vaccine dose. I think it would be good to give the second dose as soon as possible.”

That second dose is likely needed for longer lasting immunity, and may also lead to more mature antibodies able to cope with what mutations SARS-CoV-2 throws at them. And if you are in a location where virus circulation is high — say, the U.K. or U.S. — exposing lots of partially immune people could lead to increased chance of mutation.

What unites the two camps is the desire to wield this vaccine — a miracle of modern medicine — as effectively and efficiently as possible; already, we are on track for thousands of more deaths, and new variants in the U.K. and South Africa may be raising the stakes.

“Everybody wants to take advantage of these amazingly effective vaccines to save the most lives,” Wachter tweeted.

“Let’s put our best minds, data, and models to this question, so we can make the best choices.” 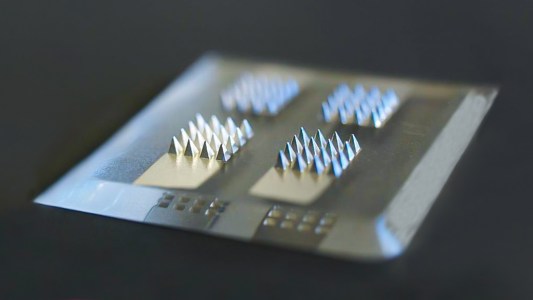 An in-development smart vaccine device uses a microneedle patch to both deliver a vaccine and measure the immune response it generates.