Skin cancer is the most common kind of cancer. Thankfully, it’s also one of the least dangerous — unless it’s a type called malignant melanoma.

Though much rarer than other skin cancers, melanoma is also more aggressive. It grows and spreads more readily and is responsible for the vast majority of skin cancer deaths.

If caught and treated early, melanoma is highly curable, with a 5-year survival rate of 92% — but there’s always a risk of it coming back.

Now, a Mount Sinai-led team of researchers has found a way to potentially lower that risk — by doubling the effect of a new skin cancer vaccine.

The vaccine, CDX-1401, is being developed by the New Jersey-based biotech company Celldex Therapeutics.

It’s designed to prevent skin cancer from coming back by targeting immune cells (called dendritic cells) to trigger antibodies and T cells, which can then fight melanoma if it returns.

In a new clinical trial, reported in Nature Cancer, the Mount Sinai team enlisted 60 patients who’d had stage 2 or 3 melanoma removed via surgery.

Half the participants got four doses of the skin cancer vaccine over four months.

The other half got the vaccine, plus two ingredients they suspected would make it more powerful: a molecule called Flt3L and an immunostimulant.

It turned out their suspicion was correct.

After administering all of the doses of the skin cancer vaccine, the researchers analyzed their levels of T cells and antibodies. They found that the extra ingredients dramatically boosted the immune response, essentially doubling the vaccine’s effect.

The molecule (Flt3L) had boosted the number of dendritic cells, while the immunostimulant had improved the cells’ ability to trigger antibody and T cell production.

“These positive results are significant not only for improving cancer vaccines, but also potentially for application to other vaccine platforms,” researcher Steven Fling said in a press release.

Though this news is promising, the vaccine still needs to prove itself in larger phase 3 trials and get FDA approval before doctors can administer it outside of a clinical trial.

More importantly, this study doesn’t show whether the boosted skin cancer vaccine actually prevents melanoma recurrence — only that it prompts a more robust immune response, which hopefully will translate into fewer skin cancers.

The researchers will follow up with the trial participants to see how many in each group experience melanoma recurrence in the coming years. That should give them a better understanding of the vaccine’s ability to prevent skin cancer, with or without the boosters. 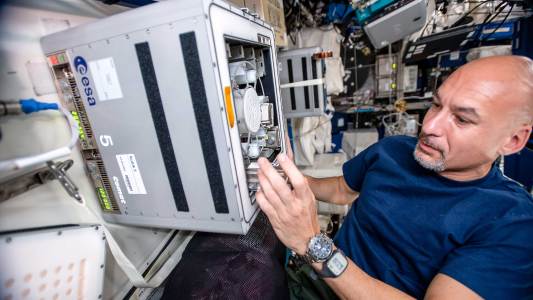 Using a bioreactor packed with bacteria could make space mining more efficient by speeding up the extraction of elements from rock.