One of the biggest barriers to space exploration — and, one day, colonization — is the cost of getting supplies from Earth’s surface into orbit.

Every extra pound of payload exponentially increases the amount of fuel a rocket needs to escape Earth’s gravitational pull (since the fuel also has to be lifted itself). That means higher mission costs, but sending people on a long mission without enough fuel, water, and food for the trip simply isn’t an option.

There may be an alternative approach, though.

Instead of launching all the necessary supplies from Earth, we could use the resources already available in space — extracting water from the moon to create fuel, for example, or mining metal on Mars for building material.

This space mining is still hypothetical — but an experiment aboard the International Space Station (ISS) suggests that Earth’s microbes may be able to help make it a reality.

The idea of using microbes for any kind of mining — let alone space mining — might seem bizarre, but it’s actually already being done here on Earth.

Our planet’s crust contains small deposits of what are known as rare earth elements (REEs), which we need for smartphones, computers, and other technology.

These elements are often found in tiny amounts, which makes mining them difficult. After breaking rock containing them into small pieces, miners add chemicals to separate out the metals, and those chemicals leave behind harmful byproducts.

We were surprised there was no significant effect of the different gravities on the bio-mining.

Some microbes are naturally adept at breaking down rock, separating it from other elements. So, rather than adding chemicals to smashed rock, some mining companies place it into tanks called bioreactors where these bacteria do their thing, making it easy for them to collect the desirable elements.

Not only is this better for the environment, it’s often cheaper, more efficient, and requires less energy than the traditional chemical-based process.

So, we know microbes can help out with mining on Earth — but what about space mining?

To find out, scientists at the University of Edinburgh spent a decade developing a special bioreactor about the size of a matchbox. They then sent 36 of them to the ISS for an experiment they dubbed BioRock.

All of the bioreactors contained a piece of basalt — a kind of rock that’s common on the moon and Mars — and a liquid solution, but half also contained one of three types of bacteria.

Once the bioreactors reached the ISS, astronaut Luca Parmitano placed some of them in a centrifuge spinning at speeds that would mimic the gravity of either Earth or Mars. Others were left in the microgravity experienced onboard the ISS.

After three weeks, the bacteria were killed.

When the scientists checked to see which of the bioreactors showed the most separation of rare earth elements from the rock, they found that two of the bacteria did as bad or worse than the control liquid at extracting the elements.

However, one type, S. desiccabilis, extracted significantly more than the control solution under all three gravity conditions — in some cases, nearly 430% more.

“We were surprised that there was no significant effect of the different gravities on the bio-mining, given that microgravity is known to influence the behavior of fluids,” researcher Charles Cockell told Space.com.

Now that the researchers know microgravity isn’t a dealbreaker for bio-mining, their next goal is to identify the best bacteria for extracting the most useful elements found in asteroids, the moon, and Mars.

They’re also looking forward to the delivery of a follow-up experiment, BioAsteroid, to the ISS in December. That one will test the ability of microbes to help with the extraction of elements from asteroid rock, instead of basalt.

Ultimately, they believe the bioreactor they’ve already developed could be scaled-up to support space mining — with a few adjustments.

“You would probably want to modify it — for example, by stirring the fluid and crushing the rock to improve its accessibility to the microbes,” Cockell said, “but the basic idea would be the same.” 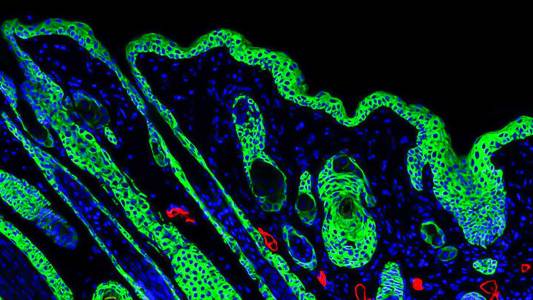 A new kind of hydrogel dressing improves wound healing and minimizes scarring by kicking the adaptive immune system into gear.