A U.K. hospital is using virtual reality to help parents see the potential impact skull-reshaping surgery could have on their baby’s appearance — helping them make a more informed decision prior to giving surgeons the greenlight.

The condition: When we’re born, our skulls are made up of several separate bones, held together by flexible material. These joints are called “cranial sutures,” and they give our skulls the ability to accommodate our growing brains.

Cranial sutures typically start hardening into bone around age two, but in 1 in every 2,500 babies, that process begins too soon. The condition is called “craniosynostosis,” and the most common version is called “sagittal synostosis.”

The challenge: Sagittal synostosis affects the suture that runs from the front of the skull to the back. Because this prevents the brain from being able to expand sideways, the front and back of the baby’s head can start to bulge, sometimes severely.

“Now, when they sign the consent form, it’s what I would call truly informed consent.”

Sagittal synostosis typically isn’t life-threatening, but it does have the potential to cause speech and language delays. Even if the only symptom is an abnormal head shape, though, that alone can affect a person’s self-esteem for the rest of their lives.

Skull-reshaping surgery can treat the condition, but it can be hard for parents to know whether putting their baby through the ordeal is worth it, especially if they don’t know how significantly it’ll change their baby’s appearance.

The idea: To help parents make that decision, researchers at Great Ormond Street Hospital for Children (GOSH) trained an AI to predict the impact of skull-reshaping surgery to treat sagittal synostosis.

The AI was trained using scans of 60 babies’ skulls both before and after the surgery, allowing it to predict what a baby’s skull looks like after surgery — with 90% accuracy, according to a BBC News report.

The researchers then developed a VR program they could use to show parents what impact the surgery was likely to have on their baby.

Parents can even give the surgeons input — they might say they think it would be better if the back of the head was less broad after surgery, for example, and the surgeons can implement those suggestions as long as it’s safe.

“Now, when they sign the consent form, it’s what I would call truly informed consent,” Noor Ul Owase Jeelani, a consultant paediatric neurosurgeon at GOSH who developed the surgery used to treat Archie, told BBC News.

The first family: British parents Amanda and Judd Michnowiec were the first to test out GOSH’s VR system, and they say it helped them feel better about their decision to have son Archie undergo skull-reshaping surgery to treat his sagittal synostosis.

“Having the opportunity to do the VR really reassured us that we were doing the right thing,” Amanda told BBC News. “Being able to see the ‘before and after’ did relieve that pressure. It was quite a weight off our shoulders.”

“When used in a positive way, VR can be a profound benefit to human health.”

It’s not clear how many other families have since used GOSH’s VR system, but Jeelani said he’d like to see a future in which systems like it are commonly used to give patients a better idea of what’s going to happen in the operating room.

“What I would like to see as a surgeon in 10, or perhaps 20 years’ time, is that most surgical practice is done this way where the control, and the power, is very much given to the parents and the patients,” he said.

The big picture: GOSH’s use of VR to help parents envision the results of skull-reshaping surgery is just one example of how the tech is being used in healthcare.

We’ve also seen VR used to train surgeons, treat mental health disorders, and provide relief from post-operative pain. It’s being used to help doctors empathize with patients, encourage people to eat healthy, and even help distract women from the pain of childbirth, too.

“A lot of people think of VR as it relates to gaming and entertainment devices, but when used in a positive way, VR can be a profound benefit to human health,” Brennan Spiegel, director of Health Services Research at Cedars-Sinai, said in 2020. 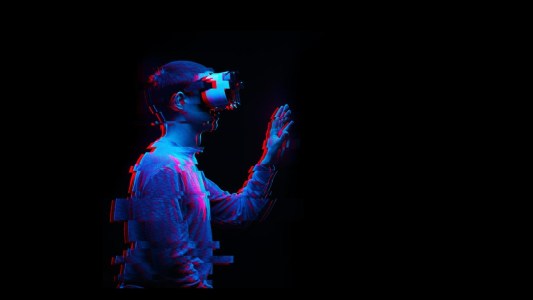