Monitoring patients’ sleeping positions can help doctors know how to treat them.

For people with epilepsy, sleeping on the stomach can be deadly, so a doctor might suggest that a stomach-sleeper with the disorder take steps to try to break the habit. If a person with Parkinson’s is changing position less frequently than normal, meanwhile, it could be a sign to their doctor that the disease is progressing.

It’d be impossible for a doctor to watch all of their patients the entire time they’re sleeping, but technology can fill the gap — a camera in a patient’s room can visually record their sleeping positions, while wearables and mattress sensors can also piece the information together.

But a patient might be hesitant to have a camera placed in their bedroom, and wearables or sensors might make them physically uncomfortable, affecting sleep quality.

Now, MIT researchers have developed a sleep monitor that noninvasively detects a person’s sleeping positions — by bouncing radio signals off of their body.

The sleep monitor, BodyCompass, is about the size and shape of a laptop.

Mounted on a bedroom wall, the device emits radio signals that reflect off the objects in the room. BodyCompass can then analyze the returning signals to determine whether a person is sleeping on their back, stomach, or side.

To get to that point, the researchers first had to train the system to focus on the important signals: those bouncing off the sleeper. To do that, they taught it to recognize patterns in the reflections caused by the person’s chest moving as they breathed.

“Identifying breathing as coding helped us to separate signals from the body from environmental reflections, allowing us to track where informative reflections are,” researcher Shichao Yue told MIT News.

BodyCompass could predict sleeping positions with 94% accuracy after a week of training.

Once the system knew how to identify the useful signals, the next step was training it to interpret them. For that, the researcher enlisted 26 healthy volunteers, each of whom agreed to have BodyCompass placed in their bedrooms.

To train BodyCompass, each volunteer wore two sensors that could detect their sleeping positions. That data was then fed to BodyCompass so that it could learn that, when a person was in a certain position, it could expect to see a certain pattern in the radio signals.

After just 16 minutes of training — during which the volunteers were asked to hold several sleeping positions — the system could predict their position with 84% accuracy. That increased to 87% after one night of training and 94% after a week.

The Future of MIT’s Sleep Monitor

MIT’s sleep monitor is far from perfect — it seemingly wouldn’t work if a person doesn’t sleep alone, for one — but according to the researchers, BodyCompass offers doctors a much-needed noninvasive way to monitor the sleeping positions of their patients.

“Since we will only record essential information for detecting sleep posture, such as a person’s breathing signal during sleep,” Yue said, “it is nearly impossible for someone to infer other activities of the user from this data.”

Monitoring is just the first step, too. Eventually, they envision equipping the device with an alert that could wake up patients in unsafe sleeping positions — or even pairing it with tech that could outright move them.

“Researchers are working on mattresses that can slowly turn a patient to avoid dangerous sleep positions,” Yue said. “Future work may combine our sleep posture detector with such mattresses to move an epilepsy patient to a safer position if needed.” 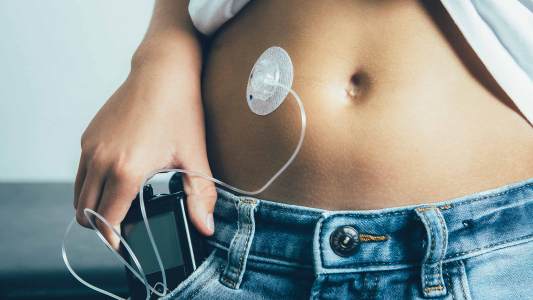 The FDA has approved a new artificial pancreas for children, making diabetes management easier for caretakers of diabetics as young as two.