A team at Switzerland’s University of Geneva believes they have hit on a new way to fight superbugs, which may also prevent the rise of more drug-resistant infections.

Using a nasty hospital bug known as P. aeruginosa, the team demonstrated that they can render the bacteria mostly harmless — preventing it from causing disease even as it goes about its business-as-usual otherwise.

“The modified bacteria became almost harmless, while remaining very much alive,” Stéphane Hausmann, researcher associate in the Department of Microbiology and Molecular Medicine at UNIGE and first author of the study, said in the university’s release.

A superbug world: We thought the invisible war had been won.

With the arrival of antibiotics, humanity had a powerful weapon against bacterial infection; infections plummeted, life spans rose, the future looked rosy. But widespread use of antibiotics — and their misuse — has led us to something new and terrifying: superbugs.

A “superbug” is the catchy name for antimicrobial-resistant (AMR) bacteria. These bacteria are no longer as vulnerable to the antibiotics we have used to treat them; infections caused by these bacteria are far more difficult to eliminate, and potentially fatal.

The UNIGE’s team’s target, P. aeruginosa, can count itself among this cohort. “These bacteria are constantly finding new ways to avoid the effects of the antibiotics used to treat the infections they cause,” the CDC notes.

P. aeruginosa resembles the lovechild of a jellybean and Medusa, and makes its home in soil and water. It’s considered an opportunistic bacteria, not generally causing disease in healthy people.

When it finds its way inside a hospital, however, it can put patients at risk — P. aeruginosa is the second most common culprit behind pneumonia in hospital patients, and third most common cause of surgical site infections. In rare cases, it can infect the heart and central nervous system.

Taking the bite out of bacteria: To defang this bacteria, in Nucleic Acids Research, the team focused on a type of enzyme called an “RNA helicase.”

“RNA helicases perform essential housekeeping and regulatory functions in all domains of life by binding and unwinding RNA molecules,” the researchers wrote in their paper.

RNA helicases are present in most living things, including bacteria, plants, and us.

“Pseudomonas aeruginosa has an RNA helicase whose function was unknown, but which was found in other pathogens,” Martina Valentini, the researcher who led the study, said in the release. “We wanted to understand what its role was, in particular in relation to the pathogenesis (disease-causing ability) of the bacteria and their environmental adaptation.”

The team engineered P. aeruginosa to stop it from expressing the RNA helicase protein. The resulting bacteria seemed fine; it grew as normal in the lab. But that didn’t tell the researchers everything they wanted to know.

“To determine whether the infection capacity of the bacteria was affected, we had to observe it in vivo in a living organism,” Hausmann said.

To do this, they used larvae of the greater wax moth, a model insect for host-pathogen interactions.

The study suggests that stopping virulence factors — the aspects that make a bacteria disease-causing — while otherwise leaving the bug alone may be a viable option against superbugs.

Live and let live: Next up is looking for existing compounds that may be able to suppress the RNA helicase enzyme, potentially giving them a second career as anti-superbug drugs.

Because the technique would not harm the bacteria’s ability to replicate, it would theoretically not put any evolutionary pressure on the bacteria to evolve resistance.

“Indeed, if we try to kill the bacteria at all costs, the bacteria will adapt to survive, which favours the appearance of resistant strains,” Valentini said. 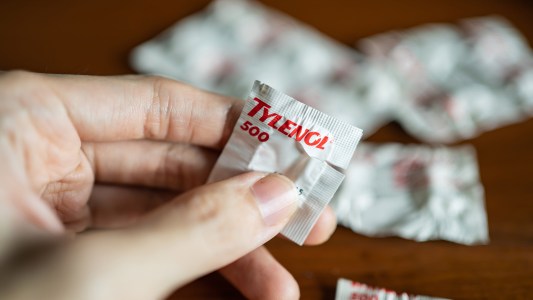 New research out of Singapore suggests that a protein thought to help acetaminophen toxicity may do the opposite.

Medicine
There may be a way to reverse acetaminophen damage in the liver
By B. David Zarley
Subscribe to Freethink for more great stories
Subscription Center
Sections
Video
Freethink
Subscribe
We focus on solutions: the smartest people, the biggest ideas, and the most ground breaking technology shaping our future.
Subscribe