Vaccines are an incredibly important scientific tool that have helped squash the spread of infectious diseases, like polio and smallpox, around the world — but not all vaccines are created equal. Vaccines don’t always work equally well around the world, and many infectious diseases have no vaccine at all. Designing a vaccine to fight malaria, for example, has been a much more difficult task.

While the unique properties of the malaria parasite itself are a huge obstacle to a malaria vaccine, scientists also believe that the timeframe of vaccines may be part of the problem. Where a naturally developed infection might spread through someone’s system in two to three weeks, vaccines need to stimulate an immune response in just a few days, before the vaccine dissipates.

A new way to solve this problem, say scientists in a new paper published in ACS Central Science, is to design a slow-releasing vaccine that can more accurately match the timeframe of a natural infection.

In a mouse study, the researchers demonstrated that a hydrogel vaccine could do just this — boosting the mice’s antibody sensitivity by 1,000 times compared to a traditional vaccine.

Just as all vaccines don’t work alike, they’re not all designed alike either. Some use dead or inactivated viruses, while others (like the chickenpox vaccine) use live but weakened versions to stimulate immunity without causing disease.

In this study, the researchers used a common type of vaccine called a subunit. These vaccines work by introducing a small piece of the virus or bacteria, called an antigen, to train the body’s antibodies to defend against it. That way, if the real infection ever enters the body, the antibodies will already know how to fight it.

There are two key ingredients to these subunit vaccines: antigens, which stimulate the antibody response, and adjuvants, which enhance the body’s natural immune response.

The researchers speculated that uneven delivery of these two ingredients could be responsible for the lower effectiveness of some vaccines — essentially, they have the right ingredients but not the right recipe.

A New Kind of Vaccine

Instead of injecting the vaccine all at once as a simple liquid shot, the team combined it with a hydrogel to create a viscous solution, while still being injectable through a syringe.

When this model vaccine was injected under the skin of mice, the gel formed a little bump, which created a small, localized spot of irritation. But this was a feature, not a bug. The inflammation at the injection site attracted immune cells, which then interacted with the slowly releasing antigens and adjuvant.

Even though the vaccine was delivered from a single spot on the mouse’s back, the immune cells it attracted were able to infiltrate the gel and carry both the antigens and adjuvants to the mice’s lymph nodes, which are powerful antibody factories that help prepare the body for invasion.

At the end of seven days, the researchers compared the immune response of mice in the trial who received the hydrogel vaccine to those who received a liquid injection of the same vaccine.

Mice treated with the hydrogel created more antibodies, over a longer period of time, and these antibodies had 1,000 times higher affinity for the antigen than those created by the traditional injection. Meaning, their attraction was higher and they fit together better, like finding the perfect missing puzzle piece.

For vaccines against diseases like malaria, the researchers explain in the study, having highly sensitive antibodies like these is essential.

While these results are promising, they involved only a single type of vaccine, and at this point have only been tested on mice. However, the researchers are encouraged by the results so far and plan to explore how this method may work to boost immune responses to specific human diseases as well.

With any luck, vaccines designed with hydrogels in the future might finally be able to take on some of our deadliest diseases. 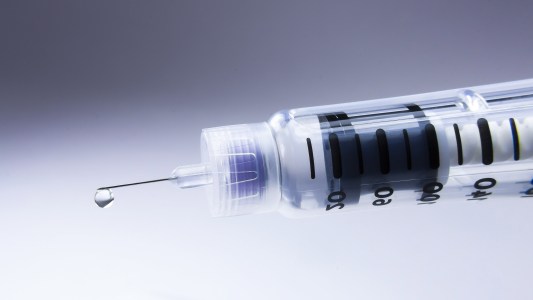 Research has found that a single surgical injection of a protein into the brain can restore blood sugar levels and send diabetes into remission, for rodents. This could transform the lives of people living with diabetes.

Biology
Could a single injection send diabetes into remission?
By Teresa Carey
Subscribe to Freethink for more great stories
Subscription Center
Sections
Video
Freethink
Subscribe
We focus on solutions: the smartest people, the biggest ideas, and the most ground breaking technology shaping our future.
Subscribe