Good bacteria in the gut change how brains grow and develop, according to a new study in PLOS ONE. Mice who were raised completely “germ-free,” with no foreign bacteria in their intestines, grew up with significantly worse memory, social, and motor skills, and they displayed unnatural fearlessness in stressful situations. Germ-free adult mice had an unusually large number of brain connections compared to mice that grew up with healthy gut bacteria. The results suggest that the ecosystem of microbes in our intestines likely plays an important role in shaping our permanent brain structure.

Your Alien Organ: Something like half the cells in the human body aren’t human. They are your microbiome: an ecosystem of friendly foreign microbes, in and on your body, that developed alongside you. Your gut microbiome, in particular, turns out to play important roles in digesting food, regulating your immune system, and probably much more that we have yet to discover.

One surprising discovery (confirmed repeatedly in the last few years) is that bacteria in the gut seem to affect mental health, including conditions like schizophrenia and depression. But we didn’t know exactly which bacteria were important, or how or why intestinal microbes actually impacted the brain.

The Experiment: To find out what difference the microbiome actually makes, researchers at Baylor College grew “germ-free” mice, with zero microbiome, in a completely sterile environment. One group of pups was allowed to grow up completely sterile, another was treated soon after birth with a full range of natural gut bacteria, and the third got only one type of bacteria, called Bifidobacteria, which are very common in human infants and can reduce inflammation in the gut.

Mice that were given a full microbiome after birth grew up just like ordinary wild mice. But germ-free mice had lots of behavioral abnormalities, including trouble with learning, memory, and motor skills, and lacked ordinary mouse anxiety in open spaces. Mice with Bifidobacteria developed much more normally, but only if they got the bacteria in a narrow time window very early on. “If you colonise too late in life it doesn’t work,” the lead author, James Versalovic, told New Scientist. That might explain why human breast milk contains such an abundance of nutrients that encourage Bifidobacteria to grow rapidly.

Wired Up: Tissues samples from their cerebellums showed that early growth of the microbiome made a big difference to the brain’s fundamental architecture. As adults, germ-free mice had way too many synapses (the circuits that run between neurons), building brain networks that are over-connected, and that can wreak havoc with cognition and motor skills.

According to New Scientist, as children grow up, their synapses are steadily pruned, weeding out unnecessary connections and improving the efficiency of neural networks. But the germ-free mice had fewer active immune cells in their brain to do this pruning, likely resulting in tangled brain circuitry.

It’s quite likely the microbiome plays a direct role in regulating these immune cells. Earlier research in Versalovic’s lab showed that Bifidobacteria produce a neurotransmitter called GABA (while others found gut bacteria that exclusively feed on GABA), which affects how immune cells respond to nervous system damage, combat infection, reproduce, and move around the body.

The Upshot: This research sits at the intersection of a number of enormously complicated and sometimes poorly understood areas of science: neuropsychology, neurodevelopment, immune system, and (most of all) our alien companions in the microbiome. But it’s a significant finding, because it gives us the first piece of evidence of which bacteria are directly impacting structural brain development — and gives strong clues about how messed up gut bacteria could affect our mental health later in life. 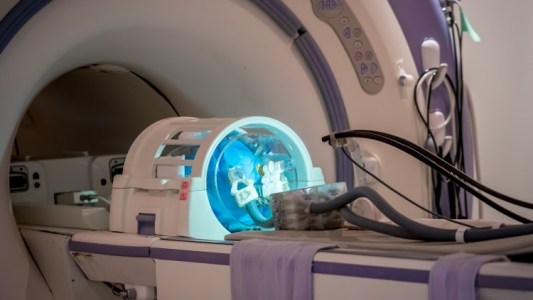 Brain
A new brain surgery robot can work inside an MRI
Subscribe to Freethink for more great stories
Subscription Center
Sections
Video
Freethink
Subscribe
We focus on solutions: the smartest people, the biggest ideas, and the most ground breaking technology shaping our future.
Subscribe