Tuberculosis, a public health scourge once considered the fashionable way to die, may spread through the air just by breathing, according to researchers at South Africa’s University of Cape Town (UCT).

If their research is correct, it would mark a major change in our understanding of a bacteria that infects billions of people.

Silent spread: Coughing has long been considered the main route of transmission for tuberculosis, and is the hallmark of the disease. (Ever seen a historical movie character cough blood into a rag? That’s TB.)

But the new research suggests this obvious route may not be the only way tuberculosis spreads — or even the main way.

“Since Mycobacterium tuberculosis was identified as the causative agent of TB, almost 150 years ago, people have assumed that coughing is the main way that infectious aerosols are generated,” UCT PhD student and study lead author Ryan Dinkele wrote in The Conversation.

The new findings suggest that aerosols capable of spreading tuberculosis could be created even during the act of breathing, which would mean people don’t have to be symptomatic to spread TB — upending over a century of accepted public health understanding.

“It’s humbling to realize that we need to be so careful when it comes to a dogmatic approach in a field,” Dinkele told the New York Times.

The white death: Mycobacterium tuberculosis has a tubular shape and waxy coating, which calls to mind some kind of old fashioned candy, like a Good n Plenty.

While it can affect multiple organs, the disease is primarily a lung infection. Once inside the lungs, symptoms can include a wracking cough — sometimes with blood — pain, weakness, fever, and lack of appetite.

Left untreated, TB patients turn pallid and thin, wasting away — from which it earned its nicknames, consumption and the White Death. According to the WHO, 1.5 million people died of TB in 2020, making it the second deadliest infectious disease in the world, after COVID-19. They estimate that over 10 million people came down with the disease.

But, not to freak you out or anything, if you’re a human on planet Earth, there’s a chance you could be carrying the tuberculosis bacterium right now, depending on where you live. That’s because the vast majority of people who test positive for TB don’t develop the disease.

When someone is infected but does not get sick, it is called a “latent TB infection,” or LTBI. The number of people with latent TB at any given time is thought to be significant; estimates have placed it at just under a quarter of the world’s population, nearly two billion people.

The study suggests that aerosols capable of spreading tuberculosis could be created even during the act of breathing, meaning people wouldn’t have to be symptomatic to spread TB — upending over a century of public health understanding.

Experts believe that people with latent TB cannot spread tuberculosis to others. But if TB can spread without coughing, these asymptomatic individuals may have a bigger role to play in its spread than we thought.

“Those of us who are TB people look at Covid and say, ‘Wow, it’s just a sped up version of TB,’” Boston University epidemiologist Robert Horsburgh, who was not involved in the study, told the NYT.

Airborne: The traditional view of tuberculosis — and the original thinking about SARS-CoV-2 — holds that the pathogen is spread via large droplets that are produced when people cough or sneeze. These can contain a lot of germs, but are heavy and fall to the ground relatively quickly.

But people also create smaller droplets when they are singing, yelling, talking, or even just breathing. These droplets are much smaller and can stay floating in the air for a longer period of time.

Coughing has long been considered the main way to transmit TB, UCT  researchers Benjamin Patterson and Robin Wood wrote in 2019. This led to the standard recommendation for covering your cough, as well as drugs that suppress coughing as ways to help stop the spread.

Despite this view’s general acceptance, however, direct evidence of cough causing transmission has been lacking.

The UCT team believes that tuberculosis can be spread via the smaller, aerosol droplets too.

Catching air: For their study, the researchers used a special device invented by Wood that can capture aerosols from infected people and figure out what pathogens are in the samples.

He and his colleagues wanted to see if breathing normally could produce aerosols with enough bacteria in them to be infectious. They took 39 patients with TB and compared the aerosols they made from three different activities: coughing, breathing normally, and breathing heavily.

Unsurprisingly, the researchers found that coughing did release roughly three times as many tuberculosis bacteria as breathing. However, a person will breathe many more times a day than they cough.

The team estimates that breathing accounts for up to 90% of the amount of potentially infectious aerosols people produce.

What it means: According to Dinkele, the findings mean that normal breathing may play a more significant role in tuberculosis transmission than we thought. And while It’s not clear how infectious the lighter load produced by breathing is, people may be spreading TB asymptomatically (or pre-symptomatically).

“Our model would suggest that, actually, aerosol generation and TB generation can happen independent of symptoms,” Dinkele told the Times.

This means that just looking out for symptoms like coughing may not be enough; what the team suggests is broader-scale testing that can identify tuberculosis infection even without any symptoms.

They also suggest borrowing another old rule of public health, one which COVID-19 has brought back to the forefront: ventilation. Even just opening some windows may help curb the spread of TB. 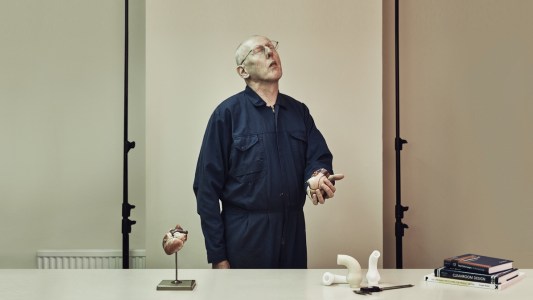 When Tal Golesworthy was told he was at risk of his aorta bursting, he wasn’t impressed with the surgery on offer – so he came up with his own idea.

Medicine
This engineer fixed his own heart
Subscribe to Freethink for more great stories
Subscription Center
Challenges
Video
Freethink
Subscribe
We focus on solutions: the smartest people, the biggest ideas, and the most ground breaking technology shaping our future.
Subscribe