A handheld device that delivers vagus nerve stimulation was shown to combat fatigue and improve cognitive performance in a study involving sleep-deprived soldiers — suggesting it could be a viable alternative to the traditional cup of coffee.

Sleep deprivation: Not getting enough sleep can do more than just leave you feeling tired — it can also affect your mood, focus, and ability to think.

That can be a big problem for people whose jobs regularly require them to stay awake for long periods of time and who also need to be on top of their game while at work — particularly doctors or soldiers.

The challenge: To combat the effects of sleep deprivation, some people gulp pots of coffee or take chemical stimulants.

However, those can produce unwanted side effects, such as anxiety and headaches. They can also be addictive, and it’s possible to build a tolerance to them, meaning users need to ingest more of the substances to achieve the same effect.

Vagus nerve stimulation: The vagus nerves extend from the brain through the neck and into the abdomen.

Electrically stimulating a vagus nerve, either with implants or external devices, has been shown to help treat a host of health problems, including epilepsy, depression, and migraines. It’s also been linked to improved memory and cognitive function.

Long day: For a new study, researchers used a handheld device called the gammaCore to see what impact vagus nerve stimulation might have on sleep-deprived soldiers.

40 active-duty U.S. Air Force personnel participated in the trial. Twelve hours after waking up, they received either vagus nerve stimulation with the gammaCore device or sham stimulation with a placebo device. They then remained awake for a total of 34 hours.

Not only do they perform better, but they also perceive that they’re performing better.

At nine points during the trial, each soldier completed activities designed to test their alertness and ability to multitask. They also responded to questionnaires that measured their mood.

The results: The soldiers who used the gammaCore device performed better on the tasks and reported feeling less fatigue and more energy. The effects of the vagus nerve stimulation lasted for about 19 hours, and peaked 12 hours post-stimulation.

“It’s exciting to us that not only do they perform better, but they also perceive that they’re performing better and that they feel less tired,” co-author Richard McKinley told Scientific American.

Looking ahead: The trial’s sample size was small, and all of the participants were active-duty military personnel, who tend to be younger and healthier than the general population.

However, if the results hold up in larger, more diverse trials, vagus nerve stimulation could one day provide sleep-deprived people with an electrifying new way to stay alert. 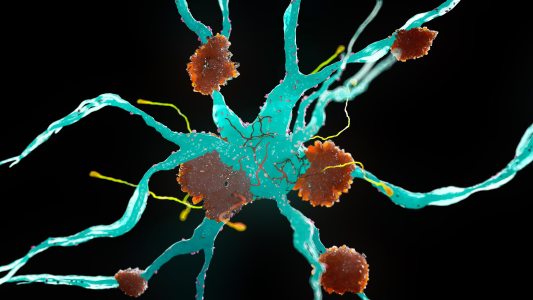 The FDA has approved the first new Alzheimer’s drug in decades, but the decision brings not only hope, but controversy.