Scientists predict that humans can live up to 150 years without significant medical intervention. The key to achieving this long life isn’t a well-kept secret: Eat better and exercise more. But this is easier said than done.

Food recommendations seem to always be changing, and exercising becomes more difficult as we get older. Wearable technology, however, is changing what we know about our dietary needs while creating new possibilities for engaging in physical activity. In other words, our fancy gadgets are helping us to eat and play our way to a longer lifespan.

Throw out the food diaries and calories trackers

In 2022, a group of Norwegian scientists investigated the effect specific foods have on life expectancy. Some of the results were as expected: Eating more legumes could add one to four years. Other results were a bit more confusing: Eating more vegetables could cause either a loss or gain of a year. Eating vegetables is generally good for one’s health, so why was it sometimes associated with a shorter life span? For that matter, why do some legume eaters only get an extra year, while others get four? Not all vegetables or legumes are made the same. Mung beans contain more iron than peanuts; kale contains more vitamin C than asparagus. To understand what we should eat to live a long, healthy life, we need a reliable way to measure the nutritional content of the food we eat.

In 2018, researchers at Tufts University School of Engineering designed a wearable device that can detect specific molecules, such as glucose and salt, in food while it is being eaten. The 2mm x 2mm sensor attaches directly to a tooth and transmits radiofrequency waves based on the nutritional molecules it detects. This technology can provide glimpses into exactly what nutrients our bodies are taking in.

“In theory we can modify the bioresponsive layer in these sensors to target other chemicals – we are really limited only by our creativity,” said Fiorenzo Omenetto, Ph.D., one of the engineers who designed the sensor. C. Doble Professor of Engineering at Tufts.

This information, however, is only helpful if we know how those specific nutrient levels influence health. What we eat affects us all differently. Two people might have the same meal, but their body’s responses can vary wildly. This has led health tech researchers to develop wearable technologies to assess the effects of diet in a more precise way. In 2020, the Melbourne-based startup Nutronimcs announced that it was partnering with engineers at the Royal Melbourne Institute of Technology (RMIT) to develop the world’s first personalized nutrition-monitoring patch. The thumbprint-sized smart patch painlessly measures key dietary biomarkers and sends the information to an app, enabling users to precisely track how their bodies respond to different foods.

“This smart patch is a significant evolution in wearable health monitoring technology,” said Sharath Sriram, the co-director of RMIT’s Functional Materials and Microsystems Research Group. “Current wearable technologies can track your heart rate and steps, but they can’t monitor your health at a molecular level. This new technology goes deeper, targeting the precise biomarkers that drive lifestyle-related diseases like Type 2 diabetes.”

It is unlikely that you’ll be wearing a tooth-mounted sensor or nutrition-monitoring patch in the next couple of years, but that doesn’t mean you aren’t going to benefit from these wearable technologies in the immediate future. For the first time, scientists can monitor nutritional intake and bodily effects in real time. These wearable sensors have the potential to move us away from general food recommendations and toward understanding the unique needs each individual requires for long life.

For millennia, researchers have known physicahhgl activity is important for health. Hippocrates and Galen advised that a lack of physical exercise was detrimental to health. Unfortunately, these ancient wise men also claimed that over-exertion was also unwise, and many western cultures took this to heart. It wasn’t until the early 20th century that scientists had begun to backtrack 2,000 years and suggest that, perhaps, vigorous physical activity can improve life expectancy.

In the mid-1900s, researchers became interested in using steps per day to quantify physical activity. For about 50 years, step-trackers were primarily used in research. In the 1990s, however, the waist-mounted activity tracker escaped the lab and started becoming popular for fitness enthusiasts. Two decades later, the step-tracker market finally hit its stride, largely thanks to FitBit.

FitBit did something remarkable. In addition to automatically recording daily steps, the device introduced goals and achievements. Walking with a FitBit wasn’t just physical activity, it was a game. Many wearable activity trackers quickly followed suit. In 2022, researchers in Denmark reviewed more than 120 studies of smart-step trackers and concluded that wearing the devices leads to about 1,200 extra steps per day.

It turns out people are more likely to engage in physical activity if it feels like playing. Despite 50 years of studies, it remained unclear whether a few extra steps could increase a person’s lifespan. The Danish researchers finally cleared up the matter. For those who are already relatively active, an additional 1,000 steps a day reduces mortality by 6%. For those who live a more sedentary lifestyle, 1,000 extra steps can reduce mortality by up 36%.

But not everyone has the luxury of going for a walk every day. For those who are older or with disabilities, physical activity is often carried out in a rehab facility and in isolation. Consequently, these groups (of which all of us are or will be a member of) engage in less exercise and don’t receive the same level of cognitive and emotional benefit that comes from playful physical activity.

Over the last decade, researchers have found that virtual reality-based exergames (VREs) have the potential to be an accessible way for everyone to engage in physical activity, regardless of age or ableness. VREs are dual tasks, meaning they stimulate the brain to generate cognitive and motor responses simultaneously. With the advances in new games, especially interactive games, it is possible to improve an individual’s physical and cognitive health better than traditional exercise, while playing with others. For example, according to two randomized control trials, a single session of Nintendo Wii-Workouts improved semantic memory and executive function of elderly individuals, and 12-16 sessions increased short-term memory and mobility of the same group.

Neuroscience
Brain implant translates neural activity into letters, letting a paralyzed man “speak”
A new device allowed a paralyzed patient to “speak,” spelling out full sentences in real-time with an error rate of about 8%.
Up Next 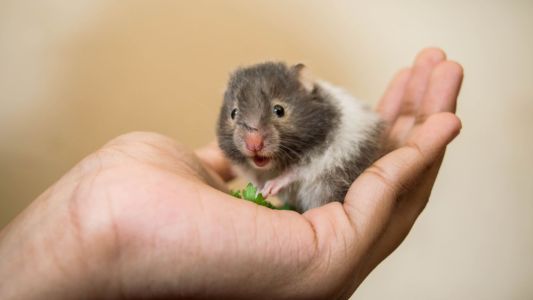 A team of scientists used gene editing to create what they thought would be a calmer rodent. Instead, the gene-edited rodents were angrier.