Using a new 3D bioprinting technique, scientists have grown the shape of a human ear under the skin of mice without performing any surgery on the animals.

In the future, this noninvasive approach to 3D bioprinting could make it possible to repair or replace damaged body parts in humans without subjecting them to the risks of surgery — a limitation of current bioprinting methods.

What Is 3D Bioprinting?

3D bioprinting is similar to 3D printing, but instead of using “ink” made of inorganic materials (plastic, metal, etc.), a 3D bioprinter uses “bioinks” that contain living cells and other natural materials.

Using these bioinks, researchers have created mini-organs, bone tissues, and blood vessels — in 2016, one group even used 3D bioprinting to grow a human ear in a petri dish.

Getting any of those creations into patients, however, has traditionally required some sort of invasive action — surgeons would need to cut a patient open to implant custom-printed bones or attach a replacement ear, for example.

This new study, published in the journal Science Advances, suggests that there’s a way around this need for surgery — and near-infrared light is at the center of it.

The international team of scientists behind the study started by creating a bioink containing cartilage cells. They then injected it under the skin on the backs of mice.

Next, they embedded instructions on the shape they wanted the bioink to form (a triangle, a circle, a human ear, etc.) onto a digital chip. Finally, they shone near-infrared light through the digital chip and onto the backs of the mice.

Within 20 seconds, the particles in the bioink began sticking together, and layer by layer, they formed the desired shape.

This isn’t the first time researchers have used light to deliver 3D bioprinting instructions to bioinks. However, past efforts have utilized ultraviolet or blue light, which can’t penetrate tissue as effectively as near-infrared light, according to the study.

While this approach is still very new, the researchers believe it could one day allow doctors to bioprint replacement body parts for humans right where they’re needed — no surgery required. 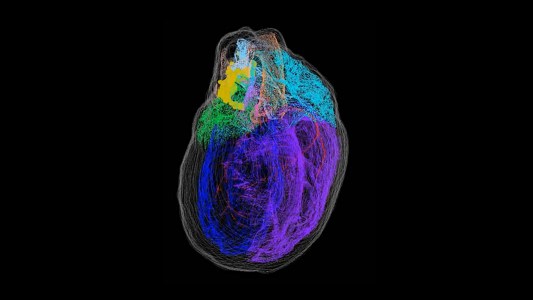