In 2010, a team of researchers climbed aboard Expedition 329 of the Integrated Ocean Drilling Program (IODP) and journeyed to the center of the South Pacific Gyre.

The region is known for the Great Pacific Garbage Patch — an area of slack water surrounded by swirling currents that funnel trash to the center (there is, in fact, a gyre at the center of each ocean and a corresponding garbage patch as well).

But while the center of the gyre accumulates trash, it remains void of nutrients. The South Pacific Gyre is the biggest ocean gyre and considered a marine desert. Life is hard to come by in this barren ocean region, especially in the deepest parts.

What is Marine Snow?

Without life-sustaining sunlight, the deep sea is fed by “marine snow” — a continuous shower of tiny nutrient-rich particles that drift down from the surface, where photosynthesis is possible. The marine snow layers on sediment on the seafloor, burying microbes.

The team, led by Morono Yuki of the Japan Agency for Marine-Earth Science and Technology and Steven D’Hondt of the University of Rhode Island, sent their massive drill 6,000 meters deep to the seafloor, and took a close look at what they collected.

It wasn’t surprising that they pulled up a sample of mud, silt, and bacteria cells. The surprise came later in the lab, when they gave the inert bacteria some food and watched them wiggle to life. These bacteria, born initially during the dinosaur era, were waking up from the dead, reports Universe Today.

“Our main question was whether life could exist in such a nutrient-limited environment or if this was a lifeless zone,” said Morono in a statement. “And we wanted to know how long the microbes could sustain their life in a near-absence of food.”

It turns out they can sustain their life a long time — a really, really long time. Layers of marine snow had buried the bacteria in the seafloor for more than 100 million years.

“At first, I was skeptical, but we found that up to 99.1% of the microbes in sediment deposited 101.5 million years ago were still alive and were ready to eat,” he said.

The team continued to feed the bacteria, and after two months, the tiny organisms replicated 10,000-fold, the group shared in Nature Communications.

“We knew that there was life in deep sediment near the continents where there’s a lot of buried organic matter,” said D’Hondt. “But what we found was that life extends in the deep ocean from the seafloor all the way to the underlying rocky basement.”

The team can’t say exactly how the microbes managed to survive under such harsh environments for so long. One theory is that the microbes found ways to live and replicate with little or no energy, or maybe there is an energy source that has yet to be discovered, reports VOA News.

Discovering these living bacteria in a place once believed to be barren of life raises the possibility that maybe we’ll find life elsewhere — such as on other planets. 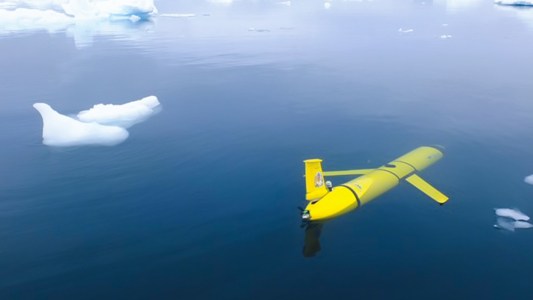 Drones
Underwater gliders could soon run off of the ocean’s changing temperatures
Subscribe to Freethink for more great stories
Subscription Center
Sections
Video
Freethink
Subscribe
We focus on solutions: the smartest people, the biggest ideas, and the most ground breaking technology shaping our future.
Subscribe