During an expedition in the Gulf of Mexico, NOAA scientists used a remotely operated submarine to spot a ghostly cephalopod, known as a bigfin squid (Magnapinna).

The sighting was a rare surprise because the team was looking for a shipwreck, not the elusive squid. Since the bigfin squid’s discovery in 1998, there have been fewer than 20 verified sightings of this deep-sea squid.

How they saw it: NOAA scientists set sail in November 2021 to examine poorly studied deepwater regions off the southeastern coast of the United States.

While filming at a depth of 1.5 miles below the surface, they saw a set of stringy, iridescent appendages drift past the camera lens.

The researchers were using a remotely controlled vehicle to film in the deep waters off a high slope in the seafloor, called the West Florida Escarpment.

While filming at a depth of 1.5 miles below the surface, they saw a set of stringy, iridescent appendages drift past the camera lens, which the scientists identified as a bigfin squid.

Bigfin squid, which is found all across the world’s deep ocean, can live at depths greater than any other squid. Scientists spotted the deepest one at a record 3 miles deep.

It is quite the visual: The odd-looking bigfin squid has large, iridescent fins and elbow-like bends in its tentacles. NOAA researchers filmed it from the remotely operated vehicle (ROV).

In the footage, you can hear NOAA research biologist Mike Vecchione say, “All of their arms and tentacles have this long, spaghetti-like extension. It’s really difficult to tell the arms from the tentacles, which is very unusual for a squid.”

The bigfin can grow up to 21 feet, most of that from its tentacles. (By comparison, the giant squid can be 43 feet long.)

Instead of chubby tentacles, it has eight skinny arms and two tentacles with elbow-like bends. Scientists aren’t sure how they use their tentacles, but they are covered in tiny suckers, which scientists think are used to capture food floating in the deep water.

Newsweek reports that one of the researchers is trying to estimate the size of the bigfin squid using a pair of lasers.

“The largest bigfin reported was about 21 ft total length but, of course, most of that length is in the extremely long arms and tentacles; the body length of that squid was about a foot,” Vecchione said. 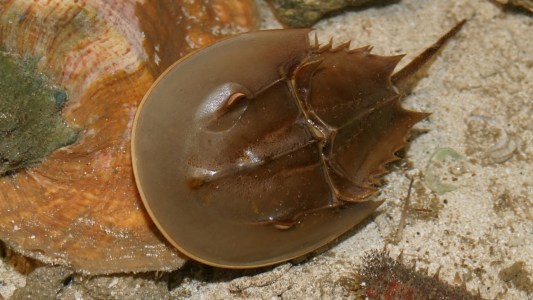 One of humanity’s strangest and most macabre activities is slowly coming to an end, a trend that every horseshoe crab should celebrate.

Medicine
Horseshoe crabs are drained for their blue blood. That practice will soon be over.
By Matt Davis
Subscribe to Freethink for more great stories
Subscription Center
Sections
Video
Freethink
Subscribe
We focus on solutions: the smartest people, the biggest ideas, and the most ground breaking technology shaping our future.
Subscribe