Few theaters in medicine or science present the challenges of the brain. Ensconced by bone and the blood-brain barrier, imbued with spiritual and psychological importance that, say, your liver is not, the brain is close to a black box, sitting at a strange intersection of science and speculation.

But advances in neuroimaging, and a new generation of researchers who are bringing computer science and AI into play, are slowly shedding light on just what, exactly, is going on up there.

One of the holy grails: accurate and detailed brain mapping.

Let’s crack open the atlas, shall we?

What is Brain Mapping?

Brain mapping is one of those wonderful science terms that means exactly what you think it means: mapping  biological and psychological processes (e.g. speech, memory, sight) onto regions of the physical brain.

This is much easier said than done.

According to the Society for Brain Mapping and Therapeutics, all forms of neuroimaging are, by the Society’s definition, a form of brain mapping. Which naturally leads us to …

Ah ha, another term that means what it says! Neuroimaging is any technique that allows us to get a picture of the brain and what’s going on inside it.

The neuroimaging technique you’re likely most familiar with is the MRI. These giant tubular devices use powerful magnetic fields — seriously, no jewelry in the MRI room! — and radio waves to construct images of soft tissues within the body, like the brain.

Think of it this way: the MRI is to soft tissues what an x-ray is to bone. MRI scans provide a static picture of the brain; to get play by play, neuroscientists turn to functional MRI (fMRI) scans. Invented in 1990, fMRI can reveal where in the brain blood is flowing, which can tell us roughly what parts of the brain are more or less active.

Relatively new by science standards, fMRI research has its drawbacks, like weak signals, small sample sizes, and false positives, but the real downside may be in how we interpret it. It’s important to realize that what you’re seeing is blood activity — as brain regions ask for more oxygen — not neural activity directly.

With fMRI, you can see which brain regions are getting more blood flow, but not the electrical and chemical process of neurons actually firing.

There’s a resolution challenge, as well. When the regions where the blood flows “light up” on fMRI, they do so at the resolution of a cubic millimeter, called a voxel. That’s pretty small, but neurons are a lot smaller; there’s roughly a million of them in each voxel. There’s a timing issue, too — the fMRI can’t scan as fast as you can think.

Even so, fMRIs can be a valuable tool, especially as they become combined with machine learning models of the brain and probes capable of measuring neurotransmitters (like dopamine and serotonin) in real time.

At its highest resolution, brain mapping could be done at the nanometer scale — we’re talking every neuron and synapse here.

We may be able to spot structural differences — or similarities — that help us unlock the physical underpinnings of neurological and psychological disorders.

This work is already being done in mouse brains. Neuroscientist Narayanan Kasthuri has begun comparing the connectomes of mice addicted to substances to those that aren’t.

“We’re already finding — it seems like there are structural changes in the addicted brain,” Kasthuri previously told me.

So far, only the worm C. Elegans has undergone a full connectome brain mapping; the Janelia Research Campus’ FlyEM Project hopes to add fruit flies to that list soon.

But these brains are tiny, even compared to lab mice — let alone humans.

Kasthuri’s ambition is to complete a full connectome of a mouse; the “mouseshot.” The task is unimaginably daunting, comprising what they predict will be a million terabytes of data, fed to an AI, backed by the supercomputing power of Argonne National Laboratory.

It’s difficult to imagine human brain mapping at the connectomic scale for anything more than a small brain region in the near future, so what’s in our skulls shall remain, at best, a grey box for now. 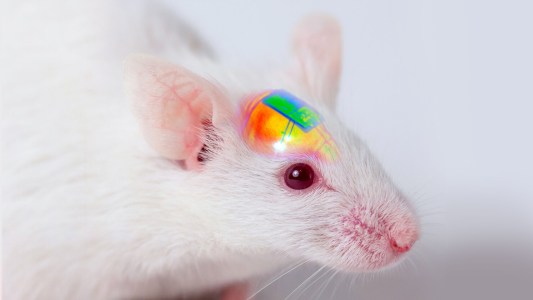 A new brain implant contains wireless charging tech that could eliminate the need for surgeries to remove and replace drained batteries.