So scientists tried a new method: putting a bunch of insect brains in a blender. According to a new study, the mashed bug brain method works — and it’s led to new discoveries about how insect brains compare to each other and larger animals.

The challenge: When it comes to brains and brain power, size doesn’t always matter — animals with smaller brains can have more cognitive capabilities than those with larger ones.

The number of neurons in an animal’s brain is a better indicator of its capabilities, but counting those cells can be time-consuming — the traditional approach has been to cut the brain into thin slices and then count the neurons in each section.

This is a time-consuming process, and you’ll need to do it many, many times to get a good sample for even one species.

The idea: In 2005, Brazilian neuroscientist Suzanna Herculano-Houzel developed a faster technique for counting neurons: the isotropic fractionator (IF) method.

Rather than slicing up a brain, this method involves blending part or all of it into a homogeneous substance in a way that releases the nuclei from their cells. A special dye can then be applied to this “brain soup” to make the nuclei from just the neurons visible and easily countable.

This new study marks the first use of the IF method for counting neurons in invertebrate animals.

Bug brain soup: After extracting the brains from 32 species of bees, wasps, and ants, University of Arizona researchers used the IF method to count their neurons.

A special dye highlights the nuclei of each neuron in the “brain soup.”

When they compared their results for two of the species to those generated through traditional methods for counting neurons, they matched up, suggesting that the blender method was just as accurate.

Why it matters: A fast, simple method for counting neurons in insects’ brains could lead to a host of new discoveries about the creatures.

Through this study alone, the researchers learned that certain bee species have higher brain cell densities than some birds and mammals.

They also discovered that bees and wasps tend to have more neurons than ants — they suspect that that’s because they need extra brain power to process visual information while flying. 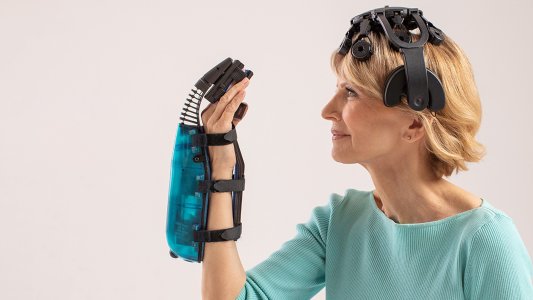