Medical device startup Neurolutions’ IpsiHand — a brain-computer interface (BCI) that uses an exoskeleton to assist with stroke rehab — has just been authorized by the FDA.

“Thousands of stroke survivors require rehabilitation each year,” Christopher Loftus, acting director of the FDA’s office of neurological and physical medicine devices, said in a release.

A stroke happens when an artery carrying blood and oxygen to the brain bursts or is blocked, causing brain cells to die.

Because the two hemispheres of the brain perform different functions, the effect of a stroke will depend on whether the damaged artery was bringing blood to the right or left side of the brain.

In general, the stroke survivor is likely to experience weakness or paralysis in the side of their body opposite the affected side of their brain (because that’s just how our bodies are wired).

Stroke rehab allows most survivors to recover at least some lost muscle control within a few weeks, but by the time the stroke is six months behind them, they aren’t likely to significantly benefit from more stroke rehab.

At least, until now.

These are “ipsilateral” brain signals, and while they can’t actually move the right arm if a stroke damages the left side of the brain, they can be used to relay that intention to a computer — and, with a little work, to a robotic exoskeleton.

Many patients can get a meaningful improvement when we wouldn’t expect them to get any.

The IpsiHand system comprises three parts: a headset, an app, and an exoskeleton, which fits over the patient’s hand and forearm.

The headset contains EEG electrodes that measure the patient’s brain signals while they think about opening and closing their affected hand. It then wirelessly sends the EEG data to the app for analysis.

The app determines the intended movement and sends a signal to the IpsiHand exoskeleton, which then helps move the hand.

By using the IpsiHand exoskeleton as part of their stroke rehab, patients can train their brain and hand to communicate again — as Neurolutions says on its website, “neurons that fire together, wire together” — so after the rehab is over, they have an easier time moving on their own.

During clinical trials, 40 patients who’d had strokes more than six months prior used the IpsiHand exoskeleton about five days a week, for at least 10 minutes each day.

By the end of the 12-week trial, every patient had demonstrated statistically significant improvement in their motor skills. The only reported adverse effects were minor, such as slight discomfort and temporary skin redness.

“What we’ve found with this device is that many patients can get a meaningful improvement in recovery of upper extremity movement when we wouldn’t expect them to get any,” Neurolutions co-founder Eric Leuthardt said in a press release.

“That’s not really true for any of the current therapies for stroke aimed at restoring function after the initial recovery period.”

The FDA has authorized the marketing of the IpsiHand exoskeleton to help adults undergoing stroke rehab. It’s only available with a prescription and is not suitable for patients with certain arm, wrist, or skull conditions.

The device will be available to clinics later this year, but initially, there will be more people who could benefit from it than devices available. Still, the authorization of the IpsiHand exoskeleton is an exciting step forward for both stroke rehab and BCIs in general.

“People have been trying for a long time to convert BCI from an experimental technology into something that will truly help patients,” Leuthardt said. “With this, we’ve shown that BCI is finally ready for prime time. I sincerely hope there are many more such devices to follow.”

Brain
Shape-shifting DNA is helping researchers decode the human brain
Researcher Nako Nakatsuka has turned to DNA to tackle an important challenge: how do we measure chemicals in the brain?
Up Next 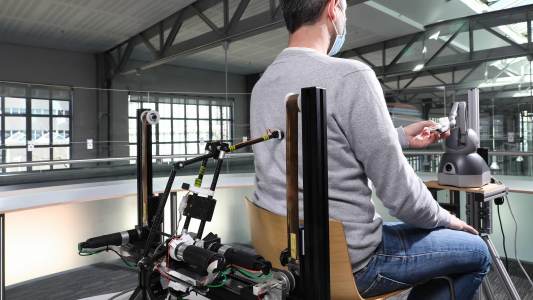 A back-poking robot can trigger presence hallucinations in people with Parkinson’s disease, giving researchers a way to finally study the phenomenon.