A robot that pokes at people’s back can trigger presence hallucinations in Parkinson’s disease patients — and one day, it may allow doctors to predict disease severity before patients show any symptoms.

Parkinson’s is a disease that affects the brain, and the most common symptoms are physical — patients may have hand tremors or trouble walking.

However, up to 40% of people with Parkinson’s also report experiencing hallucinations — they see or hear things that aren’t actually there, or feel the presence of a nonexistent person.

“It happens when I am alone, cooking or sitting at the table — I see spiders of sorts falling from the ceiling out of the corner of my eye,” Maurizio De Levrano, who’s been living with Parkinson’s since 2015, said in the press release.

“I’ve also felt a presence behind me,” he added. “It felt like the ghost of my mother.”

Research suggests that hallucinations may be an early sign that a Parkinson’s patient is going to eventually experience more severe mental symptoms, such as dementia or delusions.

However, Parkinson’s hallucinations are difficult to study because they occur randomly, and some patients are hesitant to report them.

“(I)t is currently very challenging for physicians to quantify their occurrence, phenomenology, and intensity,” said Fosco Bernasconi, a neuroscientist at the Swiss Federal Institute of Technology Lausanne (EPFL).

In a 2014 study, EPFL neuroscientist Olaf Blanke developed what he calls a “robot ghost test.” At the time, he proved that the procedure could trigger presence hallucinations in healthy people, and now, he and his colleagues have shown that it can do the same for people with Parkinson’s.

To induce the presence hallucinations, a person’s finger is connected to a small robot on a table in front of them. When they make a poking motion with that finger, another robot arm pokes them in the back, in about the same location.

When the poking happens at the exact same time, the person doesn’t experience anything strange. However, when the robot’s poking is programmed to be out of sync with the person’s motion, they experience a presence hallucination.

“When I had no control over the robot touching my back, I felt a presence, like there was somebody with me, touching my back,” Joseph Rey, one of the patients involved in the study, said in the press release.

The researchers believe this instinctive feeling of another person’s presence is due to a disconnect between the person’s expectations and reality.

“By having a delay between the front movement and the touch on the back, we trick the brain into perceiving this presence hallucination,” Bernasconi explained in a video.

“This we believe is generated due to the fact that the brain makes a prediction of what will happen,” he continued. “Because of the delay, this prediction is falsified, therefore, it thinks that there is somebody behind them during the robotic task.”

Using those insights, they could predict the severity of Parkinson’s symptoms from patients’ brain scans of those regions.

“Adapting the robotic device and procedure to the scanner allowed us to identify a brain network that is relevant for presence hallucinations in patients with Parkinson’s disease,” said co-first author Eva Blondiaux.

“(T)hat could potentially serve as a biomarker for more severe forms of the disease associated with hallucinations and cognitive deficits,” she added.

Patients who reported experiencing presence hallucinations outside the study were more sensitive to the robot ghost test.

The researchers believe the test could one day be used to predict the severe cognitive impairments that often follow these hallucinations.

“This could lead to findings that, before you have any motor symptoms of Parkinson’s disease, we can already tell you, based on the test, whether you will have more severe forms of Parkinson’s or not,” Blanke said.

They’ve already started a larger clinical trial and are now working to refine the design of their “ghost” summoning robot toward that goal. 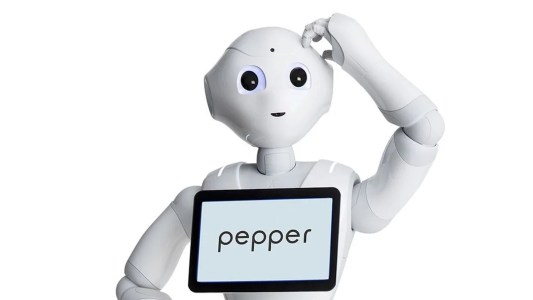 This robot’s thought process isn’t a secret — researchers gave the AI the ability to share its internal monologue with humans.

Robotics
We can now hear an AI robot’s thought process
By Kristin Houser
Subscribe to Freethink for more great stories
Subscription Center
Sections
Video
Freethink
Subscribe
We focus on solutions: the smartest people, the biggest ideas, and the most ground breaking technology shaping our future.
Subscribe