Atoms: they are the underpinnings of life, the universe, and everything. But even though they compose all of visible matter, every chemical compound, and every protein in your body, it’s incredibly onerous to see them up close.

By themselves, atoms are too small for even our most powerful microscopes. But now, armed with a suite of new technology, cryo-electron microscopy has revealed the individual atoms in a protein — and how they really fit together.

Research teams at Germany’s Max Planck Institute for Biophysical Chemistry and the Medical Research Council Laboratory of Molecular Biology in the U.K. have both recently pushed cryo-electron microscopy into atomic resolution.

“There’s really nothing to break anymore. This was the last resolution barrier.”

As revealing as a microscope can be, there is an entire universe outside of the reach of a standard, turn-the-knob light microscope. Electron microscopy, in ever-more-incremental strokes, has revealed this world — without it, we would not be able to see viruses or proteins, keys to understanding the processes of life.

Electron microscopy fires a stream of electrons at whatever is being imaged; using what is reflected back, the microscope creates an image of the subject.

Callaway’s been covering the coming cryo-electron microscopy revolution for a few years now.

“There’s a huge range of very important biological problems that are now open to being tackled in a way that they could never before,” UCSF structural biologist David Agard told Callaway in 2015.

These new preprint studies, though yet to be published or peer-reviewed, are the next step to tackling said problems.

There is already an imaging technique that can achieve atomic-level images of structures — x-ray crystallography, which uses a crystalized sample and x-rays to get results. It can take years developing the proper crystals, however, and some proteins just flat-out won’t crystallize, Callaway writes.

The teams used enhanced tools to wring ever-sharper images from the data, including technology that ensures the electrons strike the object at coordinated speeds, which gives better results. The Cambridge group also availed themselves to more sensitive detectors and a software program that helped wipe the noise of ricocheting errant electrons from the results.

Both teams imaged apoferritin, a protein, Callaway reports, whose Steelix-like strength and stability makes it a popular cryo-electron microscopy subject. The Cambridge researchers achieved an atomic resolution so sharp, they could see individual hydrogen atoms not only in the protein, but in the molecules of water surrounding it.

The ability to see the atomic structure of proteins may unlock a deeper understanding of these most basic components of life. Researchers looking to develop drugs based on the structures of proteins will also have new places to target.

When trying their cryo-electron microscopy techniques on a simplified version of the GABAA receptor — target of anxiety meds and anesthetics, among other things — they saw details that had never been seen before, including water molecules at a site for histamine, a driving factor in allergic reactions.

The ångström is the infinitesimal unit by which radiation wavelengths and our advancements penetrating that atomic abyss are measured.

“It was like peeling off a blur over your eyes,” Aricescu told Callaway.

“At this resolution, every half ångström opens up a whole universe.” 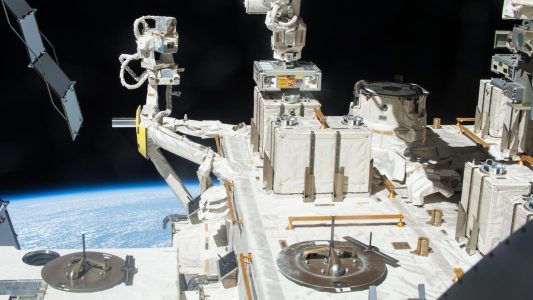 Bacteria that survived on the outside of the ISS for three years suggests that panspermia is still a viable theory for the origin of life on Earth.

Astronomy
Did life on Earth travel here from Mars?
Subscribe to Freethink for more great stories
Subscription Center
Sections
Video
Freethink
Subscribe
We focus on solutions: the smartest people, the biggest ideas, and the most ground breaking technology shaping our future.
Subscribe