Most of this data is stored in servers at data centers, which are costly, energy intensive, and take up a lot of physical space.

DNA is a promising storage alternative to data centers, and now, Boise State University researchers have developed a new method for DNA data storage that eliminates a major hurdle to its adoption — and it looks a bit like the Lite-Brite toy you may have played with as a child.

Digital data is stored using sequences of just two numbers: 1 and 0. DNA uses letters (A, G, T, and C), representing chemical bases, to store information. Translate data’s digital sequences into four-letter codes, and you can use DNA to store your digital information.

As for why we’d want to store data in DNA, researchers estimate that all the digital data in the world could be packed into just 20 grams of DNA, meaning we could save tons of physical space currently occupied by data centers.

DNA is also far more durable than servers and could potentially protect our information for millennia, but retrieving data from DNA isn’t easy.

A large machine called a sequencer is needed to decode the stored information, and the retrieval process is slow — it can take almost a day to decode a single word.

To eliminate the need for sequencing, the Boise researchers started with single-stranded DNA (imagine breaking the DNA strand in half).

They programmed this DNA strand to fold itself back and forth into a flat, rectangular card shape. This rectangle has 48 sites where other single strands of DNA could plug into it — you can image those docking stations as being like the holes in a Lite-Brite’s peg board.

Each site on the DNA rectangle served as a “bit” in the digital code. If it had a strand of DNA plugged into it, that translates to a 1. No DNA in a hole indicates a 0.

After encoding a message via the pegboard, the next step is retrieving it. For that, fluorescent DNA strands are paired to the strands on the pegboard.

Once the DNA strands were lit up like pegs in a Lite-Brite toy, the researchers used a super-resolution microscope to image it. An algorithm could then analyze the image and decypher the pattern on 1s and 0s to retrieve the embedded message with 100% accuracy — no DNA sequencing required.

You’re about as likely to have a super-resolution microscope in your home as you are a DNA sequencer, so this still isn’t going to be the tech that brings DNA data storage into the mainstream.

They’re now looking for ways to speed up the process used to encode and retrieve the data, as well as ways to increase the amount of data they can store using their system. 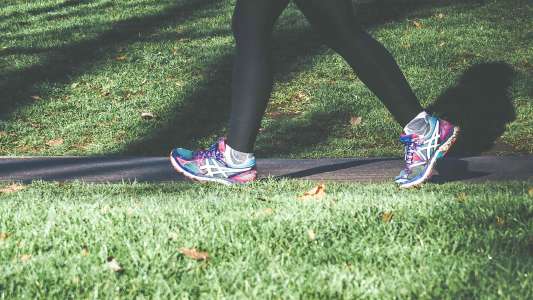 An ankle exoskeleton that significantly increases self-selected walking speed could make it easier for older people to get around.