Bottlenose dolphins’ signature whistles just passed an important test in animal psychology. A new study by my colleagues and me has shown that these animals may use their whistles as namelike concepts.

By presenting urine and the sounds of signature whistles to dolphins, my colleagues Vincent Janik, Sam Walmsey and I recently showed that these whistles act as representations of the individuals who own them, similar to human names. For behavioral biologists like us, this is an incredibly exciting result. It is the first time this type of representational naming has been found in any other animal aside from humans.

The meaning of a name

When you hear your friend’s name, you probably picture their face. Likewise, when you smell a friend’s perfume, that can also elicit an image of the friend. This is because humans build mental pictures of each other using more than just one sense. All of the different information from your senses that is associated with a person converges to form a mental representation of that individual – a name with a face, a smell and many other sensory characteristics.

Within the first few months of life, dolphins invent their own specific identity calls – called signature whistles. Dolphins often announce their location to or greet other individuals in a pod by sending out their own signature whistles. But researchers have not known if, when a dolphin hears the signature whistle of a dolphin they are familiar with, they actively picture the calling individual. My colleagues and I were interested in determining if dolphin calls are representational in the same way human names invoke many thoughts of an individual.

Because dolphins cannot smell, they rely principally on signature whistles to identify each other in the ocean. Dolphins can also copy another dolphin’s whistles as a way to address each other.

My previous research showed that dolphins have great memory for each other’s whistles, but scientists argued that a dolphin might hear a whistle, know it sounds familiar, but not remember who the whistle belongs to. My colleagues and I wanted to determine if dolphins could associate signature whistles with the specific owner of that whistle. This would address whether or not dolphins remember and hold representations of other dolphins in their minds.

Urine as an identifier

The first thing my colleagues and I needed to do was find another sense that dolphins use to identify each other. In the 1980s and 1990s, researchers studying spinner dolphins in Hawaii noticed that the dolphins were occasionally swimming through each other’s urine and feces with their mouths open. Using these observations as a springboard, my colleagues and I decided to test if dolphins were able to identify each other from urine.

We began by first collecting urine from dolphins under managed care and simply pouring small amounts of it into lagoons where the dolphins live. The dolphins immediately showed interest, and with little training, quickly began to follow the research team anytime we carried poles with cups filled with urine. When we poured urine into the water, the dolphins would open their mouths and swim through the urine plume.

Our team then got urine from dolphins at other facilities to see if the subjects could differentiate between familiar and unfamiliar urine. The dolphins spent more than twice the amount of time with their mouths open tasting familiar urine compared to unfamiliar urine, providing the first evidence that dolphins can identify other individuals by taste.

With this, my colleagues and I had what we needed to test representation in signature whistles.

Previous studies in children have successfully used multiple senses to show that pre-linguistic infants can form conceptual representations of people. My colleagues and I used this type of work as a theoretical basis for our second experiment.

We found that, on average, when the urine and whistle matched, dolphins spent about 30 seconds investigating the speaker. When there was a mismatch, they only stuck around for about 20 seconds.

The fact that the dolphins consistently reacted more strongly to matches than mismatches indicates that they understand which whistles correspond with which urine. This uses the same framework as other studies that use matching sensory information to demonstrate that animals have mental representations of individuals.

But what makes dolphins different is that they aren’t just matching physical qualities – face with a smell, for example. They are doing this with signature whistles they invent themselves. Just as you can hear a name and imagine a face with all the associated memories, dolphins can hear a signature whistle and match the urine cue.

Signature whistles represent the most language-like aspect of dolphin communication currently known. However, the scientific community knows little about dolphin non-signature calls or the functions of their other acoustic signals. With further research into how dolphins communicate with sound – as well as with chemicals – it may be possible to better understand the minds of these mammals. 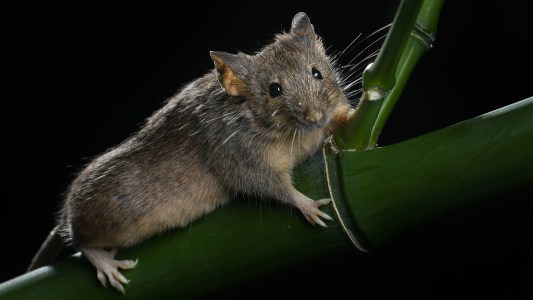 CRISPR has been used to rearrange the chromosomes of lab mice, a world’s first in mammals and a breakthrough in bioengineering.