Chinese researchers say they’ve successfully reprogrammed the genome of the common lab mouse — rearranging its genes and reducing its number of chromosomes from 20 to 19.

This breakthrough could not only lead to new treatments for cancers and other diseases, but also give humans the ability to create entirely new species.

Chromosomes 101: Chromosomes are thread-like structures made of a single molecule of DNA and a protein. They’re found in the nucleus of plant and animal cells and allow DNA to be accurately copied into new cells during cell division.

Different species have different numbers of chromosomes — humans have 23 pairs, with one chromosome in each pair coming from our mother and the other from our father. (The only exceptions are reproductive cells — those only contain one copy of each chromosome.)

Being able to rearrange mammal chromosomes could lead to new treatments for cancers and other diseases.

Species can undergo evolutionary changes to their standard arrangement of chromosomes (known as a “karyotype”) — two chromosomes might fuse or one might split into two.

However, these changes aren’t common — rodents experience them 3.2 to 3.5 times every million years, while primate rearrangements happen 1.6 times per million years.

Many individuals, meanwhile, can be born with chromosomal abnormalities that can affect their development or health. People with Down syndrome, for example, have an extra copy of chromosome 21, while people with Turner syndrome are missing a sex chromosome.

Why it matters: Being able to break apart, combine, or otherwise rearrange chromosomes in mammals and have those changes pass down to the animals’ offspring could be hugely useful.

We could use the ability to better understand chromosomal abnormalities seen in humans, such as the ones linked to cancer, for example, and potentially develop treatments or ways to prevent them.

We could also take advantage of it to learn more about how chromosomes influence evolution and lead to the development of new species. Humans’ own chromosome 2 appears to be a fusion of two chromosomes found in other primates — chimps, gorillas, and orangutans all have 24 pairs of chromosomes.

However, while scientists have managed to engineer chromosome-level changes in yeast, it’s never been done in mammals — until now.

Bio breakthrough: Chinese researchers have now published a study in Science detailing how they used the gene-editing tool CRISPR to create mice with 19 pairs of chromosomes, rather than the standard 20.

When allowed to mate with wild mice, these rodents were even able to reproduce, although rarely, and pass their karyotype on to offspring.

“This means that, for the first time in the world, we have achieved complete chromosomal rearrangement in mammals, making a new breakthrough in synthetic biology,” lead author Li Wei of the Chinese Academy of Sciences told the state-owned Science and Technology Daily.

Little Bamboo: The key to the researchers’ success was the creation of a ​​unique reproductive stem cell for the process and the discovery of the right chromosomes to rearrange.

When they tried to stitch together longer chromosomes, the mice didn’t develop properly, but fusing two shorter chromosomes resulted in healthy, normal-looking mice — they named the first of this new species Xiao Zhu or “Little Bamboo.”

“This research is a breakthrough in bioengineering technology,” said Li.

“[It’s helping us] understand the impact of large-scale remodeling of mammalian chromosomes, and to gain a deeper understanding of the molecular mechanisms behind growth and development, reproductive evolution, and even the creation of a species,” he added. 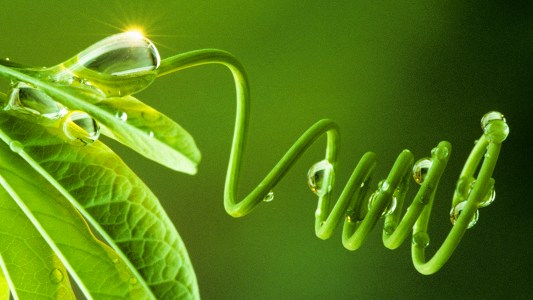 In a small study, researchers have engineered soy plants to have higher yields thanks to improved photosynthesis.

Agriculture
Breakthrough in photosynthesis boosts plant growth up to 30%
By B. David Zarley
Subscribe to Freethink for more great stories
Subscription Center
Sections
Video
Freethink
Subscribe
We focus on solutions: the smartest people, the biggest ideas, and the most ground breaking technology shaping our future.
Subscribe