Science is a lot more boring than it is commonly portrayed. Movies often show montages of bespectacled scientists scribbling notes (probably on a chalkboard) before they finally punch the air in delighted revelation. Or maybe they show a huge team of researchers spending years on some scientific problem, and then the protagonist turns a blueprint upside down and says, “but could this be it?” Everyone is amazed.

The reality of science is far more prosaic. It is years upon years of hard graft, dead ends, worrying about funding, conferences, more dead ends, more hard graft, and a whole lot of collaboration. Science is less about eureka moments and lone geniuses and more about standing on the shoulders of giants. But occasionally, a development bucks the trend, giving at least some validation to the Hollywood tropes.

One example is in the truly revolutionary gene-editing technology known as CRISPR. The tool is incredible not just for what it can do and how it might change human life, but also for its origin story — a tale of a game-changing discovery, a eureka moment, and research conducted for research’s sake.

The story starts in 1987 when a Japanese research team headed by Yoshizumi Ishino was researching the microbe E. coli. They wanted to explore a peculiar gene called iap. This mysterious gene was unique, consisting of blocks of five identical segments of DNA divided by unique “spacer” DNA. But because this was the 1980s and the technology wasn’t sophisticated yet, the Osaka team didn’t really know what to make of the observations, or what to do with them.

Fifteen years later in the Netherlands, a team headed by Francisco Mojica and Ruud Jansen of Utrecht University renamed these “sandwiches” of iap to “CRISPR,” which means “clustered regularly interspaced short palindromic repeats.” What Mojica, Jansen et al. discovered was remarkable: These genes encoded enzymes that could cut DNA. Still, no one knew why this happened, and the implications of this weren’t fully appreciated.

Three years later, Eugene Koonin at the National Center for Biotechnology Information, noticed that these unique DNA bits in the “spacers” looked remarkably like viruses. And so, Koonin theorized that certain microbes were using CRISPR as a defense mechanism. It was a bacterial immune system. He suggested that bacteria used CRISPR (and their cas enzymes) to take fragments of invasive viruses and then paste them into their own cut DNA, where they acted as a kind of bacterial vaccination against future viruses, or like an immune-system memory.

It was left for microbiologist Rodolphe Barrangou to prove Koonin right. CRISPR really was cutting and pasting DNA.

The implications of this were rather lost on both Barrangou and the microbiologist community. Barrangou himself used (and monetized) this technology to make virus-resistant bacteria for his yogurt-making employer Danisco. But on the other side of the country, at the University of Berkeley, these findings were being read by two people who would transform CRISPR technology: Jennifer Doudna and Emmanuelle Charpentier.

Doudna and Charpentier were experts in the field of RNA — the blueprints created by DNA that act as the messenger required to encode all the proteins of life. What they discovered is that the CRISPR system could be reprogrammed to cut and paste not only virus DNA, but also whatever isolated DNA they wanted. They published their findings in a now-famous 2012 Science article.

But what does “reprogram” actually mean? First, we have to understand that CRISPR not only cuts and pastes virus DNA into its own DNA (as an immune-memory system or look-up table), but also uses this information to cut up future invader viruses, which prevents them from replicating. It does this by releasing RNA matching the virus’ DNA (which it has stored) along with its own cas enzyme. If these two find any invader virus DNA, they latch on, and the cas enzyme cuts it in two. It’s an incredibly clever process.

This finding produced the eureka moment: “Oh my gosh, this could be a tool!” Doudna recalled. To make that tool, they simply needed to attach this cas enzyme to an RNA of their own choosing, so that the enzyme would find and cut the matching DNA to that RNA. It’s sort of like a microbial “find and cut” function. What’s more, they could then induce a cell to stitch genes to fill the gap — a type of “find and replace” function.

The implications of what Doudna and Charpentier discovered have opened new and unprecedented opportunities. Since their original 2012 paper, an increasing number of companies and research operations have been conjuring up exciting ways to apply CRISPR technology. Not only does it have huge application in biomedical fields, such as targeting the protein dystrophin responsible for many types of muscular dystrophy, but it also could transform agriculture, energy, and even mammoth rewilding.

As with any new technology, there are dangers and ethical questions surrounding the use of CRISPR, especially concerning the prospect of creating “designer babies”. In 2018, the issue stepped out of the theoretical realm when the Chinese scientist He Jiankui edited human embryos for the first time in history, in an attempt to make the babies resistant to the HIV virus. (He was sentenced to three years in prison.) Arguably, these are normal calibration issues that society must deal with when faced with a revolutionary technology.

What’s doubly great about CRISPR is the story behind it. Across decades and continents, the story has involved accident, eureka, and out-of-the-box thinking. But it’s important to note that the research was done for its own sake. It was conducted to study E. coli, to examine bacterial immune systems, and to develop stronger yoghurt cultures, all while, in the words of Jennifer Doudna, “not trying to get to a particular goal, except understanding.” The research ultimately accomplished much more than that. 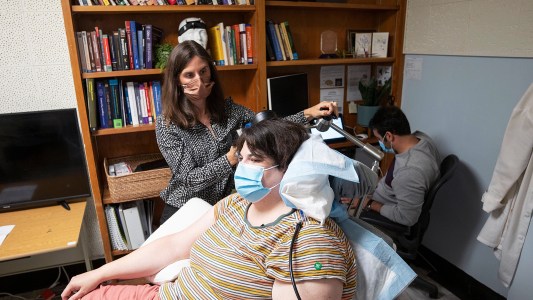 A woman with severe treatment-resistant depression has found relief, thanks to “pacemaker” implanted in her brain by UCSF researchers.