A woman with severe treatment-resistant depression has found relief, thanks to a matchbook-sized “pacemaker” implanted in her brain by UC San Francisco researchers.

“Within a few weeks, the suicidal thoughts just disappeared,” the woman, who asked to be identified only by her first name, Sarah, told the New York Times. “Then it was just a gradual process where it was like my lens on the world changed.”

Why it matters: Everyone feels sad or despondent sometimes, but the estimated 280 million people worldwide with depression experience those feelings for days, weeks, or even months at a time — in some cases, they rarely feel anything else.

There’s no cure for depression, but some people find relief through medication and therapy. About 30% of patients have treatment-resistant depression, though, meaning they’ve tried multiple meds without relief.

In most cases, it uses implanted electrodes to deliver pulses of electricity to specific areas of the brain. These pulses are designed to correct abnormal electrical activity in the brain, similar to how a pacemaker corrects an abnormal heart rhythm.

“[This] is a whole new way of addressing the most difficult-to-treat cases of depression.”

The FDA approved DBS to treat Parkinson’s in the 1990s, and since then, it’s been used to treat epilepsy, chronic pain, and other conditions, but the results of studies of DBS in people with treatment-resistant depression have been mixed.

The UCSF team suspected that the problem is that DBS devices typically stimulate just one part of a patient’s brain. Depression, however, is complicated. It can involve many parts of the brain, and those parts can vary from patient to patient — so they developed a personalized approach to DBS.

How it works: They started by analyzing Sarah’s brain for 10 days, seeing what parts were most active when she experienced severe feelings of depression and what parts could, when stimulated, help relieve those feelings.

They then implanted a DBS device just under her skull, but instead of the typical one electrical lead, this device had two.

One of these leads runs to the part of Sarah’s brain that is most active during depression flare-ups. It constantly monitors the area for a pattern of electrical activity that indicates she is about to experience depression symptoms.

If it detects that pattern, it triggers the other lead — which runs to the part of the brain that provides relief when stimulated — to deliver a small, painless jolt of electricity for about six seconds.

“The idea that we can treat symptoms in the moment, as they arise, is a whole new way of addressing the most difficult-to-treat cases of depression,” first author Katherine Scangos said.

Looking ahead: The device caused Sarah to experience almost immediate relief from her depression symptoms, and the treatment is still working 15 months later.

A positive result in one patient isn’t enough to consider a therapy a success, but the UCSF researchers have already enrolled two more people with treatment-resistant depression in their trial, and they hope to add another nine.

“There’s still a lot of work to do,” Scangos said. “We need to look at how these circuits vary across patients and repeat this work multiple times. And we need to see whether an individual’s biomarker or brain circuit changes over time as the treatment continues.”

A life worth living: Even if the therapy proves effective in others, getting it from medical journals to patients will be a challenge. It’s far more expensive and risky to perform brain surgery on someone than to prescribe them a medication, after all.

As co-senior author Edward Chang told the NYT, the team’s research could lead to non-invasive treatments that help more people in the future — but even if it doesn’t, many people with severe treatment-resistant depression might see the therapy as worth the risk and cost.

“The device has kept my depression at bay,” Sarah said, “allowing me to return to my best self and rebuild a life worth living.”

Neuroscience
Brain wrinkles and folds matter – researchers are studying the mechanics of how they form
Brain folding is another poorly understood mechanism of the most complex known structure in the universe.

Drugs
The DMT ‘elves’ people meet while tripping
Why do so many people encounter these ‘elves’ after smoking large doses of DMT?
Up Next 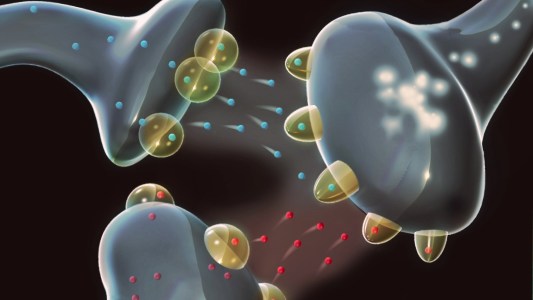 Physiologists David Julius and Ardem Patapoutian were awarded the Nobel Prize in Medicine for their research on human sensory perception.