It’s obvious just by looking at them how alien jellyfish are.

Lacking bones, eyes, and almost any organs we’d recognize, they are only very distantly related to us vertebrates, using a body plan they’ve evolved separately over hundreds of millions of years.

So it seems unlikely that the jellyfish nervous system could ever help us understand our own brains. But researchers at Caltech have been genetically modifying some of the small squishy fellows for exactly that reason — literally lighting up their neurons with glowing genes.

“There’s this long, beautiful history of people going and finding marine invertebrates for whatever the questions were at the time,” Brady Weissbourd, a postdoc at Caltech, told WIRED’s Amit Katwala.

Jellyfish have some unique advantages that make them attractive science material. They’re see-through, making it easy to see what’s going on inside, and because the Caltech jellies are so tiny, they happily swim around on a microscope slide, providing a closer look at the entire creature.

Jellyfish have some unique advantages that make them attractive science material.

Researchers “can put an entire living jellyfish under a microscope and have access to the whole nervous system at once,” Weissbourd said in a press release.

The most surprising discovery from the jellyfish nervous system may not only help us understand these oddest of creatures, but also how our own brains evolved.

How to make a jellyfish nervous system glow: There’s a reason you don’t see a big, walnut-looking brain when you peer through a jellyfish’s ghostly body: It’s because they don’t have one.

Instead, the jellyfish nervous system is entirely distributed around its body, a net of roughly 10,000 neurons. This means that the various parts of a jellyfish’s body can just keep on trucking, even when separated. (As someone who’s been stung by orphaned tentacles on the beach, I can attest to this strange ability.)

To figure out how jellyfish coordinate all those distant neurons into actions, the researchers genetically modified them to make their neurons glow.

This jellyfish’s reproduction is keyed to light; two hours after light exposure, the jellies release their eggs and sperm into the water. The team snatched up the eggs, inserted the glowing gene, then anchored them to microscope slides — as they grew into glowing models of an ancient and alien nervous system.

Jellyfish pizza: Glowing jellies in hand, the team set out to discover how the jellyfish nervous system handles one of its crucial acts: eating.

When a jellyfish catches a shrimp, it folds itself up — moving tentacle to mouth and mouth to tentacle at the same time. The team wanted to figure out how the jellyfish nervous system, spread out around its circular body plan, pulls this off.

How does its cloud of a brain coordinate a whole-body maneuver?

By watching it light up, the researchers determined that the net-like brain works in regions. The wispy jellyfish nervous system may appear unstructured, but by observing the glow, the researchers were able to see that it actually has a surprising amount of organization.

The circular network of neurons in the jelly is “subdivided into patches of active neurons, organized in wedges like slices of a pizza,” Caltech’s David J. Anderson, corresponding author of the study, said.

“When a jellyfish snags a brine shrimp with a tentacle, the neurons in the ‘pizza slice’ nearest to that tentacle would first activate, which in turn caused that part of the umbrella to fold inward, bringing the shrimp to the mouth.”

These jellyfish pizza slices would have been impossible to see without the glowing cells.

“You have to be able to visualize the active neurons in order to see it—which is what we can do with our new system,” Anderson said.

Beyond jellies: Unless you’re a big fan of the inner workings of jellyfish brains and/or extraordinary pizza metaphors, this may not seem too exciting. But figuring out how the jellyfish nervous system works can help us to better understand the brains of other creatures, too — including our own.

The jellyfish is unique in just how different it is from most animals scientists study. We’re more closely related to a worm than a worm is to a jelly.

But jellyfish belong to a group of animals which were among the first to evolve nerve cells like our own, Katwala noted. By studying the jellyfish nervous system, we are getting something like a glimpse into the ancient past.

By studying the jellyfish nervous system, we are getting something like a glimpse into the ancient past, and our own brain’s evolution.

Figuring out how the features of a distantly related creature like the jellyfish work can help us understand how our own brain evolved — working backwards toward our common ancestors.

What did we share, before our paths split 600 million years ago? Why did our nervous systems evolve the way they did?

“Jellyfish are an important point of comparison because they’re so distantly related,” Weissbourd said. “They let us ask questions like, are there principles of neuroscience shared across all nervous systems? Or, what might the first nervous systems have looked like?” 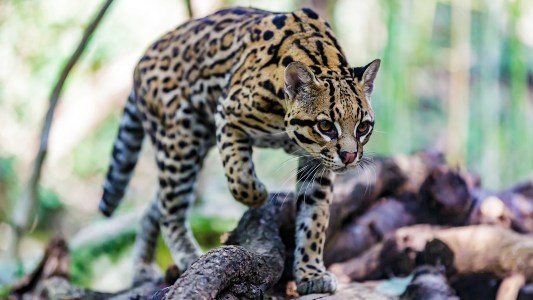 There are fewer than 80 ocelots known to exist in the wild in the U.S. Can artificial insemination save the species?

Animals
Can artificial insemination save the ocelot?
Subscribe to Freethink for more great stories
Subscription Center
Challenges
Video
Freethink
Subscribe
We focus on solutions: the smartest people, the biggest ideas, and the most ground breaking technology shaping our future.
Subscribe