The United Kingdom is launching a world’s first trial to test whether adding graphene to recycled asphalt can increase the lifespan of a major highway — and decrease costly, annoying road maintenance.

The challenge: We do most of our traveling along roads, so it’s important that their quality is maintained — poor roads can damage cars, cause accidents, increase congestion, and delay vital services, such as ambulances or fire trucks.

Road maintenance can be problematic, though — in addition to being costly, it delays traffic and has environmental costs.

Help from graphene: One solution to this problem is to build stronger roads that don’t decay as quickly — and graphene might be able to help with that.

Adding even a tiny bit of graphene to another material can increase its overall strength.

Graphene is a type of carbon that’s just one atom thick. It’s been called a “wonder material” for its many desirable qualities, which include extreme flexibility, high conductivity, and super strength.

Research has shown that adding even a tiny bit of graphene to another material can increase its overall strength dramatically — and now, a U.K. project is going to mix it into the recycled asphalt being used to pave a busy road.

Advanced asphalt: National Highways, the company tasked with maintaining U.K. roadways, has been exploring graphene applications with researchers at the University of Manchester for several years.

Based on positive test results, it’s now going to remove the asphalt along a three-mile stretch of the A1 highway in Northumberland, mix graphene in with the recycled asphalt, and then use it to repave the road.

“Laboratory trials have been a success, and the on-site trials in Northumberland will be a world first use of graphene in road production, ” Graeme Watt, National Highways’ asset needs manager, said in a press release.

After construction wraps up in early November, National Highways and Manchester researchers will monitor the road to see how it compares to ones without the benefit of graphene.

Looking ahead: It isn’t clear how much graphene will be mixed into the recycled asphalt or what it will cost — though the price has been dropping, graphene is still an expensive material, costing about $100 per gram.

Still, National Highways appears to think the upfront cost of mixing graphene into recycled asphalt will pay off in the long run.

“From what we’ve seen so far,” Watt said, “it could make some of our assets last significantly longer.” 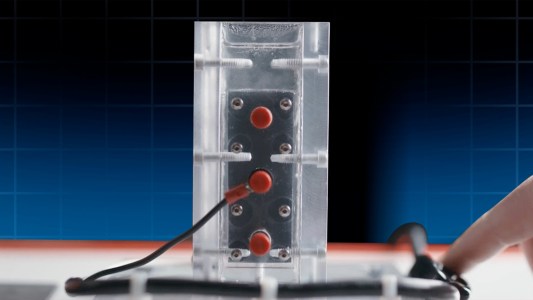 The U.S. Energy Department estimates that tankless water heaters can be up to 34% more efficient than conventional storage water heaters – cutting your annual heating costs by 40%.

Series|Make It Count
The man hacking hot water to save the planet
5:16
By Stephen Johnson
Subscribe to Freethink for more great stories
Subscription Center
Sections
Video
Freethink
Subscribe
We focus on solutions: the smartest people, the biggest ideas, and the most ground breaking technology shaping our future.
Subscribe