Heart defects are the most common kind of birth defect in humans — nearly 1% of babies are born with some sort of problem with either the structure or function of their heart.

To treat or prevent these congenital heart defects, researchers need to be able to study developing human hearts — but they can’t ethically go into the womb and conduct tests on living fetuses.

They can study animal models, cell cultures, and donated fetal remains, but those options don’t allow them to see an actual human heart developing from day one.

Researchers at Michigan State have revealed, in a yet-to-be-peer-reviewed study, that they’ve grown tiny, functional models of human hearts, also known as “heart organoids,” from stem cells in the lab.

“Now we can have the best of both worlds, a precise human model to study these diseases — a tiny human heart — without using fetal material or violating ethical principles,” researcher Aitor Aguirre said in a press release. “This constitutes a great step forward.”

From Stem Cells to Heart Organoids

Researchers have already created organoids that mimic the function and structure of human lungs, kidneys, and brains, Recently, some have grown mini human heart pumps and even models of a human heart in cardiac arrest.

However, the MSU group’s heart organoids are unique: they contain all of the developing human heart’s primary cell types, as well as a functioning structure, including heart chambers and blood vessel-containing tissue.

To create the mini hearts, the researchers started with donated adult skin or blood cells. They then genetically reprogrammed the cells back into their embryonic stem cell state, the way they were when they could still develop into any type of cell in the human body.

But the breakthrough was a new technique that coaxed the cells into developing into mini hearts. Six days in, the hearts began beating. By day 15, they were tiny spheres (about 0.4 inches in diameter) that contained all of the human heart’s primary cell types and structures.

This follows the timeline of actual fetal heart development — meaning the researchers were seeing the first couple weeks of the process in real-time.

The Beat Goes On

The MSU researchers are now studying defects in their heart organoids, in the hope of finding ways to treat or prevent congenital heart disease.

“The organoids are small models of the fetal heart with representative functional and structural features,” researcher Yonatan Israeli said. “They are, however, not as perfect as a human heart yet. That is something we are working toward.”

Still, the organoids are already the most accurate lab-grown model of the developing human heart available, and according to MSU’s paper, released on the preprint server bioRXiv, the process for creating them is simple, efficient, and scalable.

The paper still needs to undergo peer-review, but if the research holds up, MSU’s heart organoids could give scientists an unprecedented look at the developing human heart — and a better understanding of all the things that can go wrong with it. 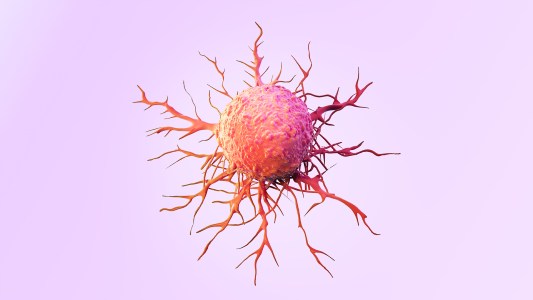 A molecule in the blood of older people promotes the spread of cancer, which could explain the link between age and metastatic cancer.

Biology
Study may explain why cancer gets more aggressive as we age
Subscribe to Freethink for more great stories
Subscription Center
Challenges
Video
Freethink
Subscribe
We focus on solutions: the smartest people, the biggest ideas, and the most ground breaking technology shaping our future.
Subscribe