Our understanding of how dinosaurs moved is an incomplete one; that kind of thing tends to happen when all of your subjects died out about 66 million years ago. Researchers at Brown, however, are turning to new 3D-imaging techniques to try and put some muscle to our bare-bones theories.

How dinosaurs moved is not a total mystery — we’ve got some clues. Fossilized footprints and the bones themselves can be parsed, analyzed, and modeled to help inform dino-motion. For example, footprints from 211-million year old therapods — think T.rex — helped researchers determine the mighty thunderlizards likely walked a lot like modern terrestrial birds, e.g. ostriches or the distinctly less fearsome quail.

And by putting bones together and manipulating the joints into as many permutations as seem anatomically possible, we can figure out what dinosaur joints couldn’t do.

But of course, that leaves much to be imagined. (Dinosaurs can be coy like that.)

To create new models for how dinosaurs moved, the team at Brown used a  3D-imaging tech called “X-ray Reconstruction of Moving Morphology” (snappily shortened to XROMM) and data from some modern models: American alligators and helmeted guineafowl, which are basically animated rugby balls, pied with polka dots.

American alligators and the rotund little guineafowl are actually close living analogs to dinosaurs. Per Brown, the researchers took x-ray video of the two creatures moving and having their joints manipulated, as well as taking CT scans of their skeletons.

XROMM then plotted these 600,000 different joint poses onto 3D maps, which showed how those joints are able to move. The technology takes the x-ray movement data and 3D models of bone morphology to essentially create moving digital skeletons.

When they set their models in motion, they found patterns in the way the gators and guineafowl’s joints moved — patterns they think can be applied to better modeling how dinosaurs moved, and other extinct animals, as well.

“Thanks to these pose usage patterns, it turns out that what dinosaurs couldn’t do with their joints will give us some big clues about how they walked,” Manafzadeh said. “What’s more, this information has been right in front of us, hidden within the data that paleontologists are already collecting. We just didn’t know how to appreciate it yet.”

The sheer number of poses captured and analyzed has inspired confidence in the researchers. The next steps, professor of biology and co-director of the XROMM Technology Development Project Stephen M. Gatesy said in the release, will be looking at “how broad those patterns are, how they evolved and why.”

Future research using the XROMM method may help us figure out how other ancient animals moved — mammals, perhaps, or (my humble suggestion) the dimetrodon, which has been coasting on looking like a dinosaur even though it’s not for far too long.

The technique could potentially be applied to other forms of locomotion, like flight, as well.

“We’ve given our colleagues the tools to improve their reconstructions of extinct animals, and to test whether their existing hypotheses about locomotion fall into the patterns we find,” Manafzadeh said. “But our next big goal is to figure out why these patterns exist.”

Understanding how dinosaurs moved can help us better understand the most crucial transformations and transitions in evolution, Manafzadeh said, “like how animals with backbones came out of the water and started walking on land, how they went from walking on four legs to two, and how flight evolved.”

The study was published in PNAS. 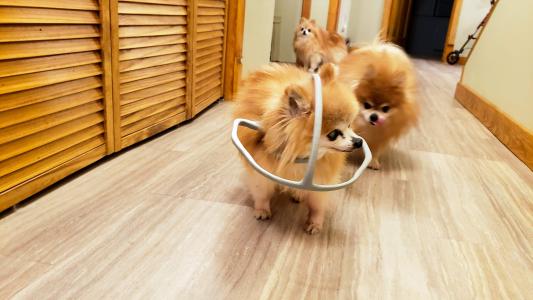 The owner of a blind dog named Sienna used 3D printing to custom-build a device that would stop the diminutive Pomeranian from running into walls.