The ice that Mara Brown surveys, day after day, has been around for more than 15,000 years. But seeing it never gets old.

“They are very pretty,” says Brown, a marine technician with the U.S. Coast Guard (USCG). “Some of them even have waterfalls, if there is a pool of water on top, and it is coming off the side.”

Every day, Brown climbs into a C-130 military transport aircraft to fly over the North Atlantic Ocean, searching for icebergs. From above, the ocean looks like a blue and white snow cone. Probing through the slushy, frozen ocean ice to spot icebergs (broken off chunks of glaciers) is a task only for a trained eye.

Brown is a member of the International Ice Patrol, a team in the USCG that monitors the location and movement of icebergs in the North Atlantic — and this time of year is when the big ones are on the move.

In the spring, hundreds of icebergs drift down from the Arctic along the Labrador Current and through “Iceberg Alley” — the waterway between Newfoundland and the Atlantic — threatening ships traversing the area. Several important shipping lanes cross that region to connect Europe to major ports in the U.S. and Canada.

Ships en route must pass by this parade of ice. The bergs, drifting aimlessly, are uncharted and sometimes invisible on the ship’s radar. Bulletins from the Ice Patrol may be the only information mariners have to alert them to keep a safe distance.

Every year in the spring, an iceberg — or a fleet of them — makes headlines, whether because of their beauty, their size, or their sheer numbers. In 2017, a cluster of about 450 bergs sailed through Iceberg Alley. Seven years earlier, a record-breaking iceberg larger than Manhattan cruised the same area. And, in 2018, an 11-million tonne giant drifted close enough to land for people to feel the chill coming off the ice.

Newfoundland thrives on iceberg sight-seeing tourism, and iceberg cowboys will harvest the bergs to sell to bottled water companies or vodka distilleries.

But despite their allure, prudent sailors know to keep their distance.

The RMS Titanic, which sank in the Atlantic in 1914, prompted the U.S. Coast Guard to launch the Ice Patrol. Since then, according to Brown, there has never been a reported loss of life or property near Grand Banks due to a collision with an iceberg — as long as the captain followed the International Ice Patrol’s published ice limit.

The days are long, and Brown and the rest of her team operate in 9-day shifts. They spend most of their time in the air, flying out of St. Johns, scanning the waters. If the weather forecast is fair, they board the plane — sack lunch in hand — for the 8-hour patrol. Brown sits in the window of the plane as an ice observer, noting every berg and its position. She classifies the icebergs by size, like “bergy bit” or “growler” (small or medium), and by shape, like tabular or pinnacle (flat or pointy).

Brown even describes an iceberg called a “dry dock.” Above the water, it looks like two separate pieces of ice. But, they are connected with an underwater ice bridge that is invisible to the mariner’s eye, but still presents a collision hazard.

“If you look closely, you can see that they are actually connected, and it’s like a tunnel of water is in between them,” she says.

The patrol also tracks icebergs with satellites and mariners’ reports.

When Brown returns back to the office, she enters the data into a computer that animates the drifting pattern of the ice. Anyone can get online to see the reports — but the resource is invaluable for mariners. In fact, some vessel insurance companies require that ships avoid areas with reported ice.

“You have to be super cautious in order to go through there. Usually, mariners that sail through icebergs are very experienced mariners,” says Brown.

Iceberg season will last through mid-July, when the days begin to shorten again. In the meantime, the iceberg patrol will crisscross the skies — warning mariners of the dangerous, beautiful flotilla lurking below the horizon. 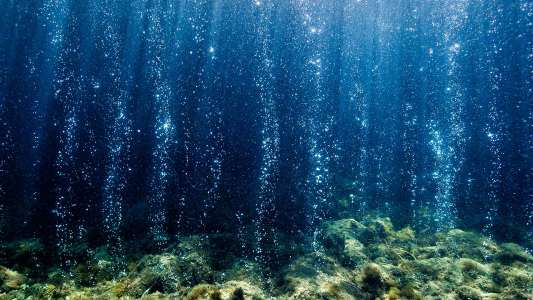 The Earth’s interior may be the last wild frontier, but not for long. These underwater drones are scanning the ocean to create a 3D model of its internal dynamics.