When it comes to imagining the future, people are… not great.

Consider the past year: despite the world’s long history of devastating pandemics, most of the world had no pandemic preparedness plan.

Or, more lightheartedly, consider what WIRED’s Paul Ford found in his copy of 1980’s The Book of Predictions. Some, sure, were shockingly close  (a prediction about Bitcoin, for instance), but most of the book is “a special, concentrated kind of wrong.” The Bitcoin Nostradamus also foresaw Minneapolis becoming America’s new national capital by 1999.

Why do we go so wrong when it comes to thinking about the future? What happens at the level of the brain?  New research out of the University of Pennsylvania may have illuminated the process behind imagination.

Something during nothing: There’s a part of the brain called the default mode network (DMN), and it’s working hard at doing nothing.

“These regions seem to be active when people aren’t asked to do anything in particular, as opposed to being asked to do something cognitively,” UPenn neuroscientist Joseph Kable told Penn Today.

The DMN has been suspected of playing a role in imagining the future but, as with pretty much anything involving the brain, we don’t really know exactly how. While previous research has shown that the DMN also activates when we’re imagining events, Kable wanted to get a deeper understanding.

Kable and two of his former grad students, Cal-Berkeley postdoc Sangil Lee and Trishala Parthasarathi, associate director of scientific services at OrtleyBio, used fMRI to attempt to do just that.

A split decision: In their study, published in The Journal of Neuroscience, the team took 24 subjects — 13 female, 11 male — and tasked them with responding to imaginative prompts.

Inside an fMRI machine — which can show where blood is flowing in the brain, a kind of analogue for what parts of the brain are working harder than normal — the subjects had seven seconds to read one of the researcher’s 32 different premises, such as “Imagine you’re sitting on a warm beach on a tropical island,” or “Imagine you win the lottery next year.”

Then, the subjects got 12 seconds to imagine their future, and another 14 seconds to evaluate “vividness and valence.”

Vividness is how detailed you can make your mental image, Kable said — how brightly those details pop in your mind. Valence is the emotional component; is the event positive or negative? Would you look forward with anticipation or dread?

Everyone went through the process four times, and a split emerged: two different sub-networks of the DMN were activating, one for vividness and one for valence. And not only that, but it seemed like a hard split — they didn’t share the work.

“One network, which we’ll call the dorsal default mode network, was influenced by valence,” Kable said. “In other words, it was more active for positive events than for negative events, but it was not influenced at all by vividness. It seems to be involved in the evaluative function.”

In other words, the emotional impact part was separate from the actual imaginating part.

The vividness network wasn’t impacted by valence; it was active for both positive and negative events, “showing that network really is involved in the construction piece of imagination.”

Exploring the land of pure imagination: Kable believes this work is a first step towards helping us understand imagination. But more nuanced assessments will need to be made to continue teasing out what’s likely to be a complex function.

The lab hopes the insights from this study and future ones can help them understand our relationship with the future; they’re already investigating why people seem to undervalue future outcomes compared to one happening immediately.

“One theory is that the future isn’t as vivid, isn’t as tangible and detailed and concrete as something right in front of your face,” he said. “We’ve started to use our identification of the sub-network involved in construction to ask the question, how active is this network when people are thinking about future outcomes compared to the same outcome in the present.”

With that work ongoing, you can, well, imagine a future where we finally crack the code of why we’re such good imaginers and such bad predictors. 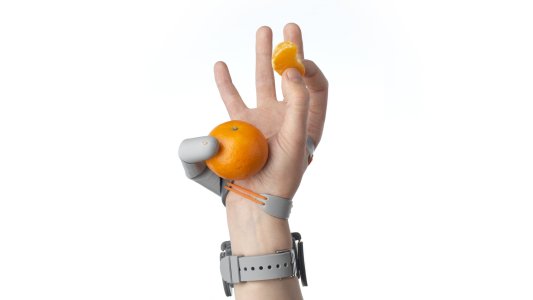 Neuroscience
Will human augmentation move too fast for our brains?
By Kristin Houser
Subscribe to Freethink for more great stories
Subscription Center
Sections
Video
Freethink
Subscribe
We focus on solutions: the smartest people, the biggest ideas, and the most ground breaking technology shaping our future.
Subscribe