Five different parasites can cause malaria, but just one — Plasmodium falciparum — is responsible for most of the 200 million infections that occur every year.

Now, scientists have discovered a microbe that appears to prevent that common malaria parasite from infecting the primary transmitter of the disease: mosquitoes.

The microbe doesn’t appear to harm the insects at all, either — meaning it could give us a way to stop the spread of malaria without disrupting the natural ecosystem.

While conducting field studies of mosquitoes in Kenya, scientists discovered the new microbe — Microsporidia MB — in the guts and genitals of about 5% of the bugs.

None of the mosquitoes with the microbe carried the most common malaria parasite, suggesting that it might protect the insects from infection.

To confirm their suspicions, the scientists fed the microbe-carrying mosquitoes infected blood in the lab. Afterwards, no malaria was detected in any of the mosquitoes with the microbe.

The team of researchers from the International Centre of Insect Physiology and Ecology (ICIPE) and the University of Glasgow published a paper on their microbe discovery in the journal Nature Communications.

“The data we have so far suggest it is 100% blockage,” ICIPE researcher Jeremy Herren told the BBC. “It’s a very severe blockage of malaria.”

“It will come as quite a surprise,” he added. “I think people will find that a real big breakthrough.”

What We Know So Far

The scientists aren’t certain why Microsporidia MB protects mosquitoes from the malaria parasite, but they do offer a couple of possibilities in their study.

One is that the microbe might be helping the insects’ immune system somehow. Another is that it could be affecting their metabolism in a way that makes the insects an inhospitable host for malaria.

What they do know is that adult mosquitoes are able to pass the microbe between themselves. It’s also inheritable, with female mosquitoes passing it on to their offspring at high rates.

Additionally, the microbe doesn’t appear to cause any obvious harm to the mosquitoes, and infection appears to last for a mosquito’s entire lifetime.

The scientists also determined that at least 40% of the mosquitoes in a region would need to be infected with the microbe to impact human malaria infections. Based on that knowledge, they are now exploring two possible ways to use the microbe discovery to help stop the spread of malaria in humans.

One is the mass release of the microbe’s spores to infect a large population of mosquitoes at once. The other is the infection of male mosquitoes in the lab, which the scientists could then release to mate with (and infect) female mosquitoes.

A Better Approach to Malaria Control

This microbe isn’t the only potential solution to the problem of malaria-transmitting mosquitoes, but it does have advantages over one of the most regularly discussed alternatives: genetic modification.

In recent years, a number of research groups have started exploring the possibility of genetically modifying some mosquitoes in a way that would make their female offspring infertile.

If we release those mosquitoes into the wild and let the genetic modification spread throughout the population, we could completely eradicate the species, proponents of the approach claim.

We are very excited by its potential for malaria control.

While simply killing all mosquitoes would, obviously, end their ability to infect people with any malaria parasite, it would also undeniably disrupt the ecosystem in ways that are impossible to predict.

Once we release the genetically modified mosquitoes into the wild, it’ll be impossible to remove those altered genes from the population — nature would be permanently changed.

The use of this microbe to prevent the malaria parasite from spreading throughout mosquito populations — and subsequently lower infection rates in humans — would be far less risky because the microbes are already found in wild mosquitos.

“We are very excited by its potential for malaria control,” University of Glasgow research Steven Sinkins told the BBC. “It has enormous potential.” 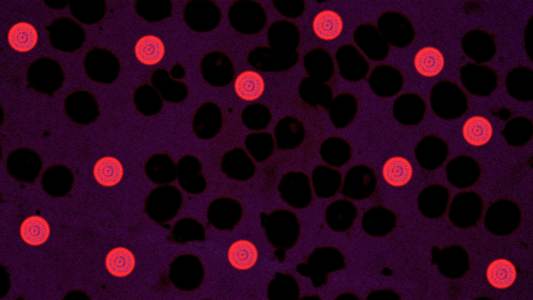 Tiny sponges that look and act like red blood cells remove toxins from the body.

Biology
Bioengineered blood soaks up toxins inside the body
Subscribe to Freethink for more great stories
Subscription Center
Challenges
Video
Freethink
Subscribe
We focus on solutions: the smartest people, the biggest ideas, and the most ground breaking technology shaping our future.
Subscribe